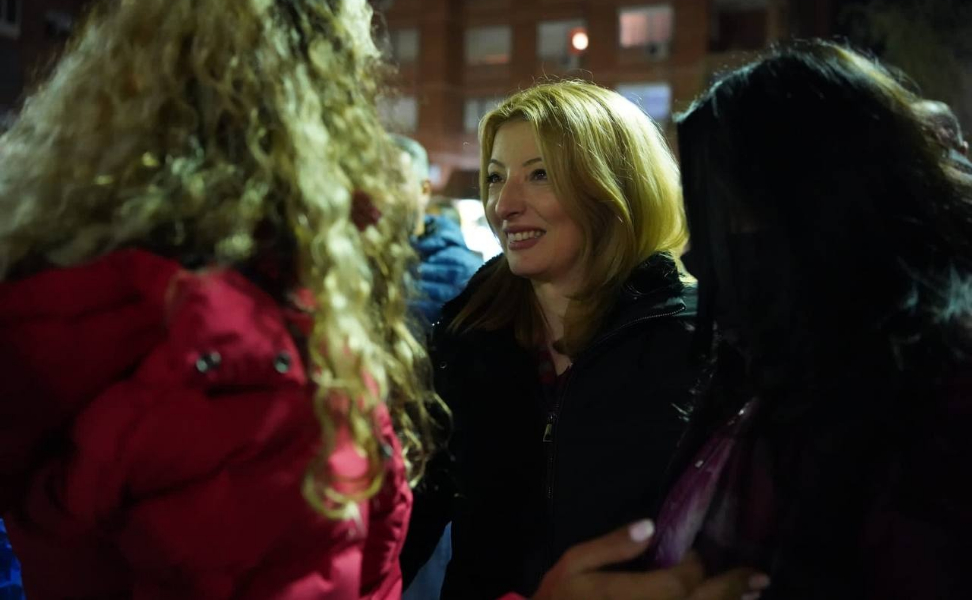 She from Karpos once again thanked the people of Skopje for the support of her vision for modern Skopje / Photo: Facebook, Danela Arsovska

The independent candidate for mayor of Skopje, supported by VMRO-DPMNE, Danela Arsovska tonight met with the citizens of the Skopje municipality Karpos where they discussed the problems and shortcomings that they note in their municipality, but also in the city in general.

Arsovska pointed out that the people of Skopje demand substantial changes, improvement of the quality of life of every citizen, and the changes start on October 31.

- The victory in the first round is a victory that you all brought together for a more beautiful, modern Skopje, and now in the second round we will once again confirm that it is time for change and those changes come after October 31. Together we will change things for the better and we will succeed in creating a more beautiful Skopje, said Arsovska.

She from Karposh once again thanked the people of Skopje for supporting her vision for a modern Skopje. He stressed that Skopje will again be a city of all, without forgotten settlements, with traffic solutions that will mean easy and fast access, more green areas.

- The citizens of Skopje deserve to live in a modern European metropolis with modern infrastructure, without forgotten settlements, with quality and sustainable solutions to the problems of the citizens, with more greenery, clean air and a healthy environment. The citizens will finally receive fast, quality and free public transport, which will offer an environmentally friendly alternative to cars, and we will additionally procure 250 new environmentally friendly buses, which will extend the bus lines to all settlements where there is a need. We will clean the illegal landfills like the one at the exit from Karposh and in their place there will be new green areas for Karposh residents, said Arsovska.

"Macedonian citizens are responsible for the pandemic compared to their neighbors," Despotovski said

Zaev: Taravari is lying, I did not offer money to MPs

Buckovski will continue to be the special representative for Bulgaria, the Government has extended his mandate

Zikov: I would not be surprised if Kovacevski is the only candidate for leader of SDSM