Conversation with Sashka Kuzmanova: Making wigs for cancer patients is more than a noble job
The "Earthquake" festival in MCC is the ultimate event with an incredibly high-quality and diverse offer
Shar Planina is being polluted, but no one is being punished
Celebrating the 151st anniversary of the birth of Gotse Delchev: The deniers of the Macedonians will not enter Macedonia
The burnt modular hospital in Tetovo has finally been removed, the place converted into a parking lot 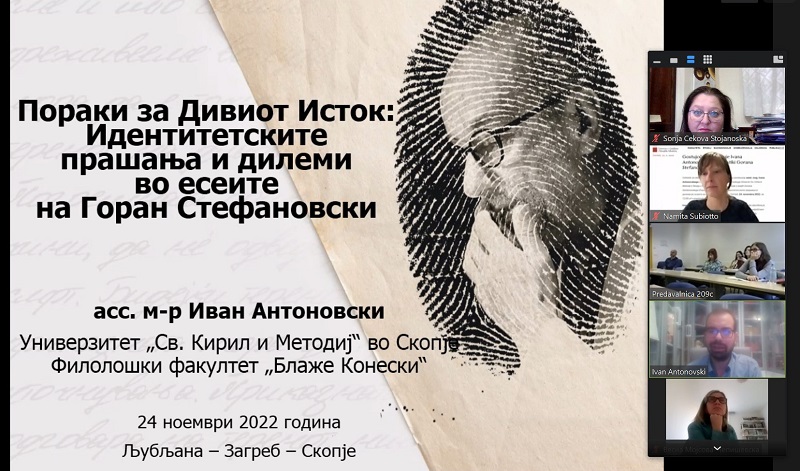 In addition to them, the event was also attended by established Macedonian and South Slavists - researchers, literary translators and writers, including the writer Lidija Dimkovska. But lecturers and literary translators from England and Greece also joined virtually. All with interest and determination to make new readings of the work of the great Macedonian playwright and essayist happen.

In the central part of the event, a lecture was held on the topic: "Messages for the Wild East: Identity questions and dilemmas in the essays of Goran Stefanovski", by asst. Ivan Antonovski, M.Sc.

- Goran Stefanovski is the first dramatist who, overcoming the Macedonian cultural boundaries, connected the former Yugoslav and the South Slavic cultural space in general with the values ​​of his work. And that with his drama "Jane Zadrogaz" in 1974, and crucially, five years later, with the then best Yugoslav drama "Wild Meat" - recognition he also received for "Crna Dupka". For decades, his plays have been on the stages of theaters all over the South Slavic area, but already part of what is regularly read by Macedonian studies students at foreign universities - only in Slovenia and Croatia, his play text has been premiered twelve times. And let's not forget that among the many recognitions, in 2007 he received the grand prize at the "Vilenica" festival in Slovenia, and that only a month before his physical departure, he was declared an honorary doctor of science by the National Academy of Theater and Film Arts in Sofia, Bulgaria. Goran showed that cultures can be connected with literature and a story can be created in which, in the name of literary values, there is no Us and Them, but only Us. And he didn't stop there - with his work, he presented all of us from the South Slavic area on the stage of Europe and the world, showing our dignity. Therefore, we are also obliged to maintain the syntheses that he established, and I am glad that with our schools, this year, we contributed to their strengthening, encouraging a new reading of Stefanovski's dramatic and essayistic works, and here we are. this event is also happening - pointed out the director of the International Seminar for Macedonian Language, Literature and Culture at the University "St. Cyril and Methodius" in Skopje (MSMJLK at UKIM) and professor at the Faculty of Philology "Blaze Koneski", Dr. Vesna Mojsova-Chepishevska, in her opening address at the event.

The event was also addressed by prof. Dr. Namita Subioto, who has been leading the Ljubljana Department of Macedonian Language and Literature for the past twenty years, and is now also the head of the Department of Slavic Studies.

- Goran Stefanovski's plays are always part of the readings of the South Slavic Studies study program at the Faculty of Philosophy at the University of Ljubljana, and we are marking the seventieth anniversary of the great playwright's birth in a special way: with a series of lectures on his dramatic work held by Assoc. Dr. Ivica Baković, expert on Macedonian and South Slavic drama in general. Baković comes to us from the Faculty of Philosophy in Zagreb within the framework of the professor exchange agreement concluded between the Faculty of Philosophy in Ljubljana and Zagreb. I am very happy that the Faculty of Philology "Blaze Koneski" is also involved in this inspiring dynamic with a special lecture by asst. Ivan Antonovski, M.Sc. for Stefanovski's essays, and with that the MSMJLK at UKIM is also involved, because Antonovski held the course of the Second Winter School for Macedonian Language, Literature and Culture on this topic this year, in which I had the honor and pleasure to participate and to make sure of his exceptionally in-depth knowledge of this hitherto modestly researched segment of Stefanovski's rich creative oeuvre - indicated Subioto.

Assoc. Dr. Baković, who holds the cycle of lectures in Ljubljana dedicated to Stefanovski's plays, emphasized that Goran Stefanovski's dramatic oeuvre is regularly read and interpreted within the teaching of several Macedonian subjects in the undergraduate and master's studies in South Slavic studies at the Faculty of Philosophy in Zagreb.

- This year, on the occasion of the anniversary, in addition, within the teaching of several subjects, Stefanovski's work was in the foreground, because through his oeuvre, students can easily get acquainted with the most important chapters of the history of Macedonian drama and theater, and even with the key currents in contemporary South Slavic dramatic literature. To my great pleasure, in this semester, I am also interpreting and refining Stefanovski's dramatic work with the Macedonian players from Ljubljana. But it was a special honor for me that as a translator I collaborated with this great playwright, when together with prof. Borislav Pavlovski, we worked on the first Croatian edition of Stefanovski's selected plays. The book "Odyssey and Other Plays" was published in November 2018. Now, thanks to my colleague Ivan Antonovski, the expert on Stefanovski's essays, we have the opportunity to get better acquainted with this important part of Stefanovski's oeuvre. In the South Slavic context, Stefanovski has an important place, and therefore this kind of cooperation is extremely important - said Banović.

In the central part of the event, asst. Ivan Antonovski, M.Sc. from the "Blaje Koneski" Faculty of Philology, in his lecture, first addressed the poetic peculiarities of Stefanovski's essay writing and presented some of his observations and theses regarding what makes it stand out not only within the Macedonian essay writing experience, but also in the concept of the essay as a genre in general.

Then, in its entirety, the emphasis of the lecture was placed on Stefanovski's attitude towards identity, in his essay texts, which, according to Antonovski, are a metagenre in the oeuvre of this great Macedonian author. Antonovski before the present performances and a mini catalog of identity questions and dilemmas in Stefanovski's essays, encouraging syntheses with his dramatic work and at the same time opening new perspectives for analyzing Stefanovski's oeuvre as a whole, sharing part of his conclusions presented in the book "Identity is a Story ".

After the lecture, the attendees led a discussion in which new questions were opened, with which the cleaning of the essay and overall oeuvre of Goran Stefanovski continues, not only in our cultural environment, but also in foreign university centers.

The writer Lidija Dimkovska joined the discussion, noting that the quotes from the work of Goran Stefanovski are very present in our cultural and social space in the past period and that it can be expected that they will be present even more in the next period, to the extent that they will become a kind of "folk literature".

With this, the activities of MSMJLK at UKIM dedicated to the work of Stefanovski do not stop. Among other things, an edition is already being prepared in which selections from his work "Canned Impressions" will be translated into several foreign languages, within the framework of the MSMJLK schools at UKIM that were held this year, as well as a collection of scientific papers from 49. The international scientific conference at which one of the central topics was the work of Goran Stefanovski, reports from the International Seminar on Macedonian Language, Literature and Culture at the University "St. Cyril and Methodius" in Skopje.

Today is World Cancer Day, to raise awareness of the disease and encourage its prevention, detection and treatment. To show support for cancer patients, several initiatives and movements will be implemented around the world today. Get the most important news, free on Viber Sashka Kuzmanova...

The burnt modular hospital in Tetovo has finally been removed, the place converted into a parking lot