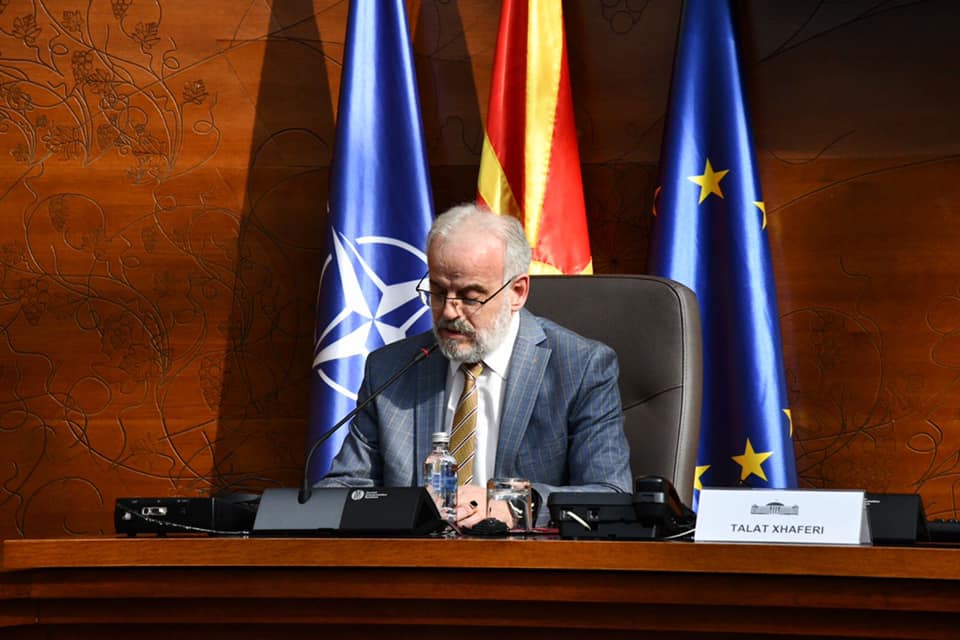 For the proposal for abolition of the "Przin government" which has already been submitted to the Parliament by the opposition VMRO-DPMNE, according to the president of The Assembly Talat Xhaferi, is not the problem when it is put on a parliamentary session, but it is necessary to secure consensus from the major political parties. In a guest appearance on Sitel TV tonight, Xhaferi pointed out that such a model of government was reached with the process of overcoming the political crisis in 2015 and 2016 and that the agreement was conditionally reached outside the Parliament between the four major political parties at the time.

- We had coordination last Monday, the coordinator of VMRO-DPMNE came out with an indication that they have prepared a draft law and will put it in procedure. I pointed out that the draft law in every sense should have the support through the signatures of the coordinators, as in fact a few years ago we had it with the appropriate signatures. But they did not wait for it to be harmonized like that, but let it go. If there was a consensus, the opposition should have waited for that consensus to be expressed through the signatures of other coordinators from the major political parties, Xhaferi said.

Once translated, he expects the law to be on the agenda of the next session of the Assembly.

The President of the Assembly also stressed that as MPs and as the Assembly they have appropriate information in which direction and what is being discussed with Bulgaria.

In any case, we as MPs and as an Assembly can not say that we do not know what the Government is doing. Having in mind that as MPs we consensually adopted a Resolution in the Assembly, in which we determined guidelines, recommendations, a framework along which the executive should move. According to the legal regulations, the competence in international relations and in the executive representation means the Government as a separate authority, but of course we as an Assembly are conditionally speaking "at the head of the executive" and of course we have appropriate information in which direction and what is being discussed. said Xhaferi.

Regarding the announced report by Minister of Foreign Affairs Bujar Osmani at the request of MP Antonio Milososki Regarding the content of the Macedonian answers to Sofia on the 5 + 1 roadmap, the President of the Parliament points out that Milososki is not only a Member of Parliament, but also the Chairman of the Foreign Policy Committee in the Parliament, who has previously requested and received appropriate access, and appropriate information from the executive power or specifically by the Minister of Foreign Affairs on relevant issues on which he considered that the Assembly should be informed.

-Of course, as a result, if there is a need for the plenum to have a session on relevant issues, we as an Assembly can not escape from our obligation because part of the foreign policy and foreign relations has the Assembly in terms of what is monitoring of things. And of course neither we as the majority, nor the Assembly as a whole, as an institution, avoids that possibility. But, of course, we thought that space should be left for the executive power, ie. of the Government to be able to force the processes, and accordingly we to follow it at the appropriate time if we need and need and will have to get involved. "We are ready to get involved both as a Commission and as a plenum as a whole," Xhaferi said.

- There is no obstacle in terms of the procedure what is prescribed by the Rules of Procedure and the laws - the part that is public and that is open to go open, but if there are questions that necessarily need to have a certain classification to go after the classification . The President of the Commission knows that, the Assembly knows that, the institutions know that it is an obligation that if any information is currently classified and should follow as such, Xhaferi explains.

Regarding the accusations of the former Deputy Prime Minister for European Integration Nikola Dimitrov that the note to the UN in only a quarter is for the use of the short and long name of the country, and the rest is related to language, Xhaferi said that it is the responsibility of the Government and I would not comment.

- There is no need for me to comment on that because it is the competence of another institution and as long as it is its competence, when it comes to the report to the Assembly, then we act as the Assembly to be part of what will be and how it will be for to decide as we decided unanimously on the Resolution, says Parliament Speaker Xhaferi.