The director of a kindergarten in Stip reduced her salaries due to the strike, the employees protested 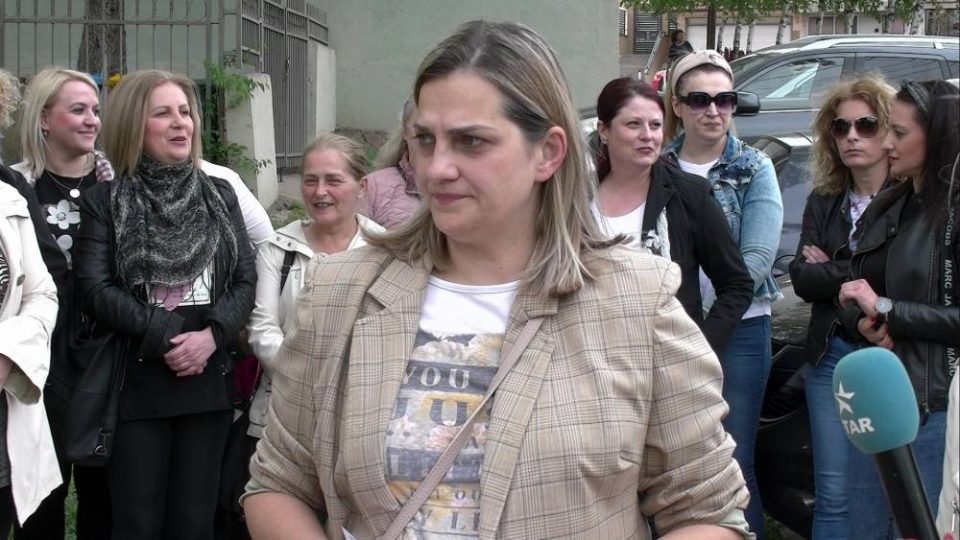 Dozens of employees in the kindergarten "Vera Ciriviri-Trena" in Stip this afternoon at a press conference react to the reduced salaries. They pointed out that the director Sofka Atanasova forgot the fact that the strike is a constitutional right, so now, in the direction of the MLSP, she is reducing the salaries of the employees who went on strike. The list of employees's names was displayed yesterday.

"Following instructions from the Ministry of Labor and Social Policy, the director of the kindergarten fined 48 employees by cutting their salaries. Humiliated educators, caregivers, professional associates, technical staff are the result of revenge for the strike. During yesterday, the director made a decision to cut the salaries of 48 employees. it is obvious that she works under the instructions of the mtsp, and it is more than clear that the strike got a strong political dimension with blackmail and mobbing of employees, said Ankica Lazareva, a caregiver at the kindergarten "Vera Ciriviri-Trena".

During the day, the director Atanasova stated that the calculations of the salaries for the employees have not been made yet and they are waiting for directions from the Ministry. However, employees say the decision has already been posted on the bulletin board.

The employees say that the punishment with reduction of salaries is unfair, because the agreement signed by SONK and the Government guaranteed the payment of full salaries to all employees who went on strike. They say they will go to court to see if the director can make such decisions without the board.

The President of SONK, Jakim Nedelkov, said today that the reduction of salaries in kindergartens could be a serious obstacle in the ongoing negotiations with the Ministry of Education and Science.

"We have submitted a request, an initiative to the Ministry of Education and Science for payment of per diems based on a collective agreement, we have a basis for that work and we are almost sure that they will be paid in the field of education. "Unfortunately, we have a problem in the MLSP with child protection, there is a really serious problem where until today there is no signal that the per diems will be paid there, it can be a serious problem in disrupting the negotiation process," said Nedelkov.

The union went on strike on April 28 after receiving a notification from the Ministry of Labor and Social Policy that the Ministry of Education and Science was approaching a peaceful settlement of the dispute. The maximum deadline for the peaceful settlement of disputes, through a conciliator or mediator, is 20 days, and the initial deadline is ten days, which expire on Sunday.

DUI: Activists of the Alliance-VMRO-Levica coalition staged the incident