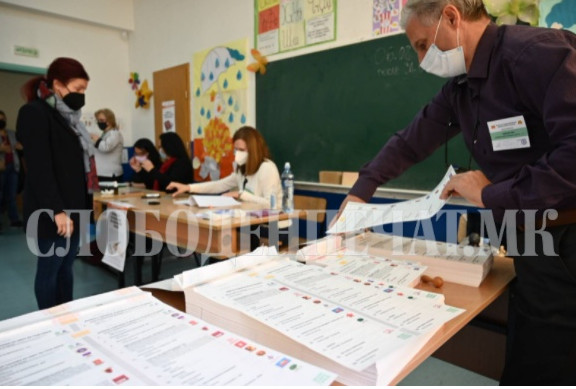 Out of a total of 2.544 or 73,1 percent of polling stations processed in today's local elections, a total of 11 voters or 135 percent voted by 906 am, State Election Commission (SEC) spokeswoman Ljupka Guguchevska said at today's press conference.

The municipalities with the highest turnout are Novaci, where 11 percent went to the polls by 25,84 am, followed by Kriva Palanka with 20,44 percent, Vevcani with 18,61 percent, Lozovo with 17.51 ​​percent…

The lowest turnout until 11 am is in Vrapciste with 4,92 percent.

She informed that in some polling stations there were interruptions in the voting due to poor handling of biometric identification devices, poor quality of the fingerprint database or problems, which, as she said, were being overcome in the process. He added that the most common problem was not recognizing the voters' fingerprints in the device.

- The Electoral Code and the instructions of the SEC and other bylaws provide in such a case the procedure continues with scanning the personal document of the voter in the scanner itself, which is part of the device for biometric identification of voters or by entering the unique identification number. of the voter, explained Guguchevska. He added that the election boards from the SEC were instructed to regularly clean the scanner where the fingerprint is left, and the voters to press more when they leave their impression on the scanner itself.

According to the instructions of the SEC, the voter tries twice with a fingerprint on the device, if there is no match then the Election Board continues to scan the personal document or enter the ID number to search the voter.

Guguchevska informed that in those polling stations where there are technical problems with the devices for biometric identification and in those places the device was replaced, the data transfer and the voting continued. The SEC has over 500 backup devices. In several polling stations, due to the inability to repair or replace the biometric identification device, the old way of voting continued.

In response to a journalist question, Guguchevska stated that the SEC so far has no information about the interruption of the voting which lasts more than three hours.

There is no more confusion here, everyone is slowly going crazy!

The trains stopped, no one moved a finger

VIDEO | Velkovski: Young people to contribute to a sustainable future through green innovations

The coldest and most snow in Lazaropole

Haxhiu: The bus was in service before leaving Turkey and everything was fine

After four centuries of colonial rule, Barbados became a republic

Those of us who work with foreign companies have a big problem: The salary received by check is not valid in our banks ?!