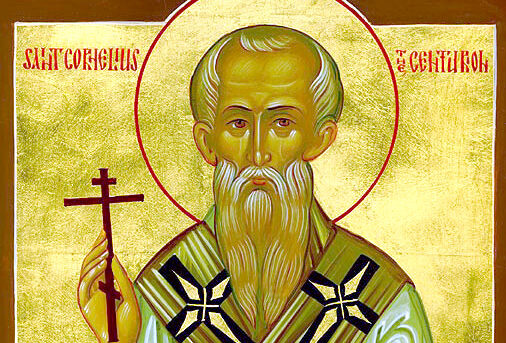 Roman and Roman officer in Caesarea, Palestine. Baptized by the apostle Peter, according to heavenly revelation (Gen. 10: 1). He was the first of the Gentiles to join the Church of God. Until then, some thought that the Church of Christ was for Jews only and for those who received Jewish circumcision. After being baptized, Cornelius left everything and followed the apostle Peter. This apostle was later ordained a bishop and sent to the pagan city of Skipseos, where St. Cornelius suffered many insults and tortures for the sake of Christ, but by the power of God he overthrew the temple of Apollo and baptized the prince of that city, Demetrius, and two hundred and seven seven pagans. After being informed by God of the day of his death, he called all Christians, counseled them, prayed to God for them, and presented himself peacefully to the Lord in his honorable old age. In time they forgot his grave and it became desolate. But the saint appeared to Bishop Silouan of Troas and told him about his tomb, with an order to build a church there. The bishop did this with the help of the rich citizen Eugene. Numerous miracles were performed from the relics of St. Cornelius.

VIDEO | Mickoski: This is a huge victory for the people of Macedonia

VMRO-DPMNE candidate for mayor of Stip, Ivan Jordanov, declared victory in the first round

Ljupчоo Nikolovski: Petre Shilegov is the winner in Skopje, we win or lead in over 25 municipalities

VIDEO: VMRO-DPMNE celebrates in Ohrid, Kiril Pecakov claims to have a lead of 2.000 votes after the first round

Jana Belcheva, Chance for Center: We are happy with the results

Ahmeti: In the first round we won in Saraj, Lipkovo and Plasnica, we have a significant advantage in Tetovo, Cair, Kicevo and Struga

Zijadin Sela: We win in Gostivar and Debar, in the second round we go to four municipalities