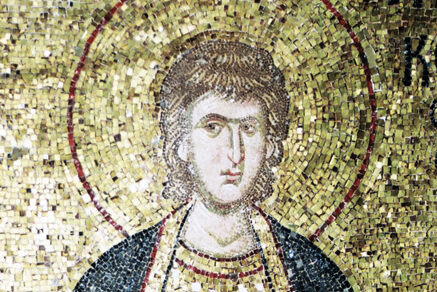 I was born in Cilicia. From a young age brought up in Christian piety. He left everything and went to preach the gospel. In Ankira he was captured by a pagan prince Sackerdon. When the prince threatened him with horrible torments if he did not bow down to the idols, St. Kalinik replied: "To me every torment for my God is welcome as the bread of the hungry." After terrible tortures and intimidation, the prince dressed him in iron pinches with inner nails and ordered him to be taken to the city of Gangrsky, because he was no longer allowed to torture or execute him in Ankira, because many who saw the heroic suffering of the man of God were converted to the faith of Christ. On the way the soldiers were thirsty and there was no water. Saint Kalinik prayed to God and drew water from a stone. When they arrived in the city of Gangrsky, the tormentors threw St. Kalinik into a burning furnace. And the saint prayed to God, saying: "Thank you, Father, Who art in heaven, Who made me worthy for this hour in which I die for Your name." Then he entered the fire. When the fire was extinguished, they found his body dead, but unharmed and whole. He suffered honorably and adorned himself with a wreath of eternal glory in the year 250.