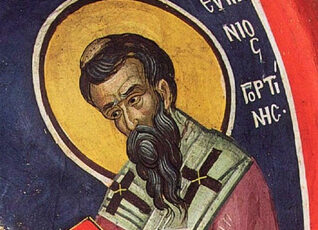 From a young age he wholeheartedly followed Christ, freeing himself from the two great burdens: the burden of wealth and the burden of the body. He got rid of the first burden by distributing all his property to the poor and needy, and from the other by a great fast. And so he healed himself first, and then he began to give healing to others. Passionless and filled with the grace of the Holy Spirit, Eumenes shone with a light that could not be hidden. Just as it is written that a city on the top of a mountain could not be hidden (Matthew 5:14), so Saint Eumenius could not be hidden from the world. As a bishop, he ruled the flock of Christ as a good shepherd. He was the father of orphans, the wealth of the poor, the consolation of the afflicted, the healer of the sick, and a wonderful miracle worker. He performed many miracles with prayer: he killed a dangerous snake, cast out demons, healed the sick, not only in his place but also in Rome and Thebes. In Thebes he prayed for rain from God in times of drought; and there he finally ended his earthly life and moved to the eternal abodes of his Lord. He lived and worked in the 7th century.