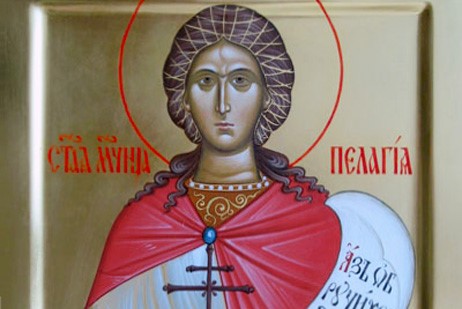 She was born in the city of Tarsus to pagan parents, but rich and famous. When she heard from Christ about Christ, she was inflamed with love for the Savior and was a whole Christian in her soul. It so happened that Emperor Diocletian himself stopped at Tarsus, and while he was staying in this city, his son, the prince, fell in love with Pelagia, so he wanted to marry her. Through her evil mother Pelagia answered that she had already promised Him to the Heavenly Bridegroom, the Lord Jesus Christ. Fleeing from the savage prince and her wicked mother, Pelagia sought out and found Bishop Clinton, a man famous for his holiness. He taught her the Christian faith and baptized her. Then Pelagia distributed her lavish dresses and great wealth, returned home and confessed to her mother that she had already been baptized. When the king's son heard about this and lost all hope that he would ever be able to marry this holy virgin, he stabbed himself with a sword and died. Then the cruel mother went and accused her daughter to the emperor, and handed her over to the court. The emperor admired the beauty of the virgin, forgot about his son and inflamed himself with impure passion for her. And because Pelagia remained steadfast in her faith, the emperor decided to burn her in a metal glowing ox. When the tormentors stripped her, Saint Pelagia was crucified with the Cross and with a prayer of thanksgiving to God on her lips, she herself entered the glowing ox, in which for a moment it melted like wax. He suffered honestly in 287. The remaining bones were collected by Bishop Clinton and buried on a hill under a rock. In the time of Emperor Constantine Copronimus, a beautiful church was built on the site in honor of the holy virgin and martyr Pelagia, who sacrificed herself for Christ to reign with Him forever.

The terrain is being cleared after the storm in Delchevo

DRONE SHOTS: What the Pride Parade in Skopje looked like

Osmani: The French proposal was not rejected, only the part that is disputable for us, we are waiting for a new one

Shooting and arrest in the center of Prilep