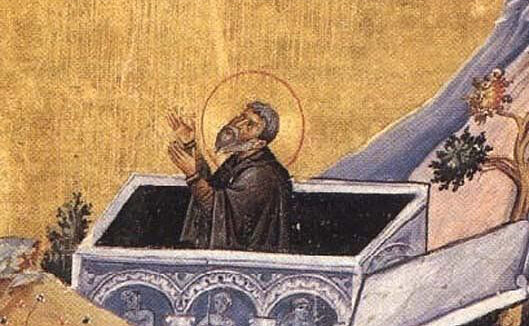 He lived like a hermit - in the summer in the open field, and in winter in a cave. He once went down to the city of Nisibia to see how the Christian faith flourished and how Christians lived. But here he was elected bishop. He participated in the First Ecumenical Council and defended Orthodoxy from the Aryan heresy. It happened once that the pagan Persians invaded Nisibia with an army. St. James came out with a litany on the city walls, so he himself climbed the wall and walked on it without being afraid of the enemy arrows that were aimed at him. Walking thus, the saint prayed to God to save the city and the faithful in it by sending flies and mosquitoes over the Persians, to drive them out of the Nisibian ramparts. He did not demand the death of the enemies or any other doom or defeat, but a little boredom that would drive them out. And God answered the prayer of his servant, and sent forth many flies and mosquitoes upon the Persians, and cast them out, and saved the city of Nisibia. Saint James lived a long and honorable life, and in his old age he died peacefully, in 350.

The longtime journalist of the Macedonian Radio Marko Ilkovski has died

"Free Press": VMRO-DPMNE calls for a front to overthrow the government

Thunderstorms, torrential rain and hail are possible this afternoon and tonight

SOC confirms: Stephen and Porphyry will hold a reconciliation liturgy in Belgrade on Thursday