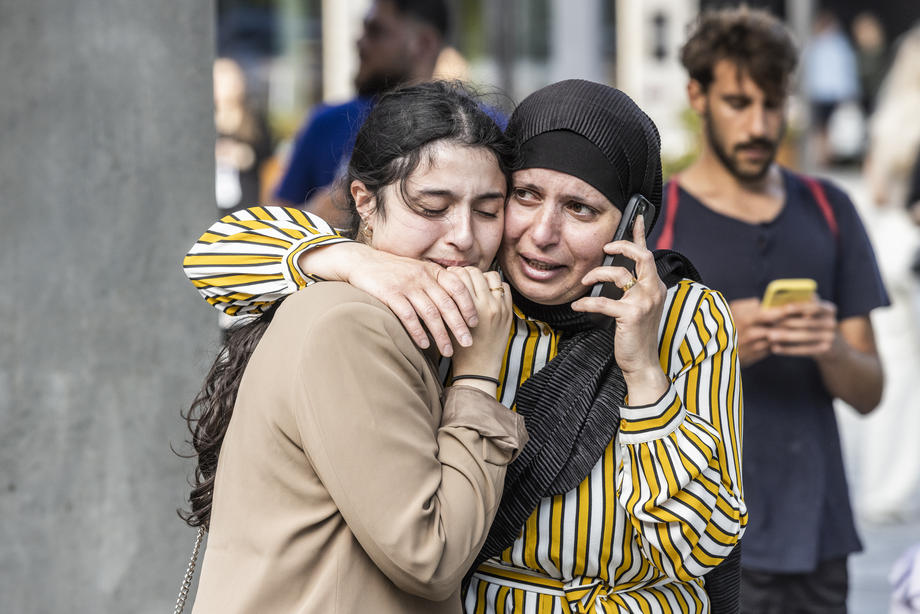 Three people were killed and several others were wounded yesterday's shooting in a shopping center in Copenhagen, the Danish police said, adding that they arrested a 22-year-old Dane and charged him with manslaughter. Reuters.

The attack rocked Denmark at the end of an otherwise joyous week, just after hosting the first three stages of the Tour de France cycling race. The event saw hundreds of thousands of Danes cheering in the streets across the country.

"Denmark was hit by a brutal attack on Sunday night. Several were killed. Even more are wounded. Innocent families shop or eat out. Children, adolescents and adults," Prime Minister Mette Frederiksen said in a statement late Sunday.

"Our beautiful and usually so safe capital was changed in a split second," she said. "I want to encourage Danes to stand together and support each other in this difficult time."

Copenhagen police said armed officers were dispatched to the capital's Field shopping center late Sunday after reports of a shooting, and told people inside to stay put and wait for help. Local media footage showed groups of terrified shoppers running from the mall.

The suspect was arrested at 17:48 local time, carrying a rifle and ammunition. Police have launched a massive search operation across the local Zeeland region in search of all accomplices.

"We will have a major investigation and a massive operational presence in Copenhagen until we can say with certainty: he was alone," Thomassen said.

The attacker killed a man in his forties and two "young people", a man and a woman, Thomassen said. Several others are wounded, and among them three are in critical condition.

The investigation so far has not indicated a racial motive or otherwise, but that could change, he said.

Police in Copenhagen will hold a press briefing this morning.

The capital's main hospital, the Rigshospitalet, received "a small group of patients" for treatment, the spokesman said, and called in extra doctors and nurses to help with them.

Danish tabloid BT published an unverified video it said was taken by a witness to the attack, Mahdi Al-Wazni, showing a man with a large rifle walking through the mall.

The footage published by the Extra Bladet tabloid shows a person being carried by rescuers in an ambulance on a stretcher.

"At first people thought he was a thief. Then suddenly I heard shots and threw myself behind the counter in the store," said the eyewitness Rike Levandovski to TV2.

"He started shooting straight into the crowd, not up into the ceiling or the floor," she added.

The multi-storey shopping center is located about 5 km south of the center of Copenhagen.

"My friend and I suddenly heard shots. I heard about ten gunshots and then ran as fast as I could to the bathroom. We squeeze into a small toilet where there were about 11 people," says another witness.

The attack followed a deadly shooting in neighboring Norway last week in which two people were killed by a lone gunman in the capital Oslo.

The terrorist threat against Denmark is currently assessed as "serious", with the biggest threat coming from "militant Islamism", according to the latest report by the Danish Security and Intelligence Service.

The threat to Denmark from right-wing extremists is considered to be at a "general" level, meaning that there is capability and/or intent and possibly planning.

Denmark last saw a militant attack in 2015, when two people were killed and six police officers wounded when a lone gunman shot and killed a man outside a cultural center hosting a debate on free speech and later killed a person outside a Jewish synagogue. in central Copenhagen.

The gunman was then killed in a shootout with the police.

A concert by singer Harry Styles on Sunday night in Copenhagen, not far from a shopping centre, has been cancelled, police said.

"Our thoughts and deepest sympathies are with the victims, their relatives and all those affected by the tragedy," said a statement from Denmark's Queen Margrethe and the Crown Prince couple.

An event in southern Denmark to commemorate the end of the Tour de France stages, hosted by the crown prince and attended by Frederiksen, was also cancelled.

The suspect will face a preliminary hearing in front of a judge today.

Slowing inflation in the US has reduced demand for gold

"Politics": The nuclear power plant as a hostage of war

PHOTO | Pro-democracy demonstrations in Brazil ahead of presidential elections

Financial aid of 1,5 billion euros for Ukraine announced at a donor conference