Chulev: Resignation from Spasovski, there were only three policemen at Skanderbeg, that's why the physical and operational security of the protest 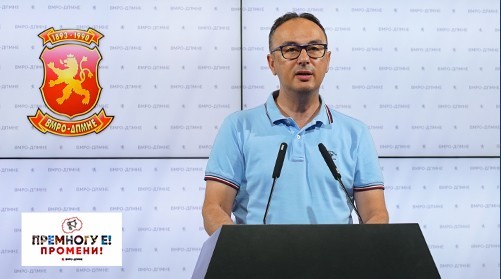 The former Technical Minister of Internal Affairs, Naqe Chulev, from the headquarters of VMRO-DPMNE, analyzed the protest from a security aspect and pointed to a series of omissions, which, according to him, should result in the resignation of the current Minister Oliver Spasovski, as well as of the Minister of Foreign Affairs, Bujar Osmani.

According to Chulev, the protest was properly announced, with a previously known route of movement and stopping points.

The Ministry of the Interior is obliged to prepare an operational plan where it will foresee measures and activities for physical, operational and traffic security of the protest. Oliver Spasovski, as Minister of Internal Affairs, is obliged whenever there is a protest to organize, in addition to maintaining public order and peace and protecting vital state facilities, to ensure the smooth maintenance of the protest and protection of the safety and life of the participants in the protest. Operational planning is carried out on the basis of a security assessment that includes security risks including security risk for protest participants. At the same time, sectors are determined, that is, critical security points where serious security incidents could occur, that is, disruption of public order and peace. In that direction, in accordance with the security assessment and the operational plan, an appropriate arrangement of police forces and assets and measures and activities that should be undertaken are foreseen. Almost always, in the previous operational plans, the Mavrovka sector, i.e. the Skanderbeg Square, is identified as a critical security point, Chulev emphasized.

According to Chulev's interpretation, during yesterday's incident, at this location, where even height security is necessary, only three security guards were visible.

This means that physical security has been completely neglected by not providing a sufficient number of police forces and adequate material and technical means. In addition, for professionally incomprehensible reasons, operational security also mysteriously disappeared, in the direction of timely information about a grouping of persons with the intention of obstructing the protest and endangering public order and peace, i.e. endangering the security, i.e. the life of the Protestants, states the ex-minister and experienced intelligence officer Chulev.

He personally attacked Minister Spasovski for not caring at all about the safety of the citizens participating in the protest.

Due to these reasons and failure to take measures and activities, there was a serious disturbance of public order and peace, causing general danger and other criminal-legal actions. In this way, Oliver Spasovski's party henchmen have committed the crime of negligent performance of duty. It is the duty and task of the minister and his colleagues to protect the safety of the participants in the protest, and they obviously did not do so, endangering their lives. Infiltrated provocateurs, provocative legitimizations, blackmail, threats, excessive use of brute force, failure to take necessary actions and others is only part of the modus operandi of this hybrid regime in the direction of moderating the anger of citizens, especially young Protestants, and causing incidents and escalation of the protest with the ultimate goal of discrediting and stifling the nationwide civil protest. Oliver Spasovski should be held criminally accountable and resign himself, said Chulev.

For reasons related to the French proposal, Osmani should also resign, Chulev believes.

The Minister of Foreign Affairs, Bujar Osmani, who called and threatened ethnic incidents, should also resign if the proposal by which Macedonia will be assimilated and Bulgarianized is not passed. Resignations because they went against their people to preserve their privileges and power, Chulev stressed.

He also sent a message to the police officers and members of the security services.

Dear colleagues, I know that these days you are subject to enormous political pressures. I know that most of you are patriots who ache for Macedonia. I know that many of you are subject to continuous mobbing, discrimination, disciplinary proceedings, suspensions, retaliatory reassignment orders. A fate we share together, but dignity and freedom are priceless. My message to you is to be persistent and strong and continue to carry out your duties honestly, with dignity and professionally in accordance with the law and do not at any cost allow party directives to be the basis for your actions. Everything is transient. The day is approaching when this hybrid government will fall. And, after the fall of this unpopular government, the career system will be restored, professionalism will be respected and the best will be rewarded. And all of you who are unfairly discriminated against, believe that you will get the place you deserve, Chulev stressed.

This morning Minister of Interior Oliver Spasovski said that the civil protests were secured by a sufficient number of policemen, according to the operational knowledge and assessments of the services, whereby incidents of a larger scale were avoided. For those reasons, that the hierarchical services work well, and the police operation completes its tasks, responsibility cannot be demanded from those who prevent an incident from occurring.