Interview with Alexander Noshpal, fashion designer and costume designer: Paris was the decisive and most significant moment in my life and that's why I'm coming back to it again
Whoever pollutes it and "earns" from Shara, will pay
Employers demand that sick leave be paid for 15 days instead of 30 days
Incidents and night watches on a daily basis
Taravari: We will have an internal party referendum on the entry of the Alliance into power

The price for freedom and the state 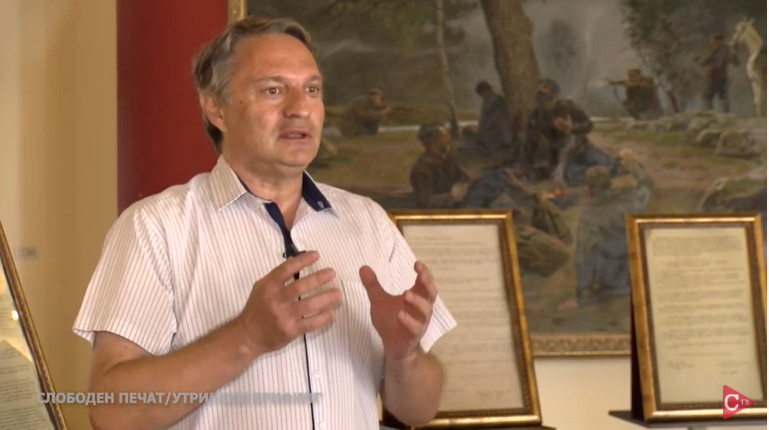 Anti-Macedonian psychopaths glorify Macedonian traitors like Mihajlov, Tatarchev, Drangov, Chkatrov and the rest of the Vmrovist-fascist dregs. They are spouting the most stupid nonsense to justify Vancheta's rehabilitation and continuity with his fascist and anti-Macedonian organization. As a few years ago, they carried out the rehabilitation of Vancho's comrade, the "legendary" murderer of Gjorce and Sandanski, the extreme Bugaroman Todor Aleksandrov.

In these transitional years, we got used to right-wing and neo-fascist Macedonian revisionism, many sleazy and sleazy shopkeepers and national converts throwing trash at Macedonian liberators and state builders. The most perverse thing is that among those sick people there are some who are considered our socio-political "elite", who are partisan children and grandchildren, persons whose ancestors fought for the creation of the Macedonian state and for the right and freedom of national self-identification of the Macedonian people. Among the revisionists there are also some historians-opportunists, who used to be members of the communist party, enjoyed privileges during socialism, wrote panegyric historical readings about the communists and their struggle, and today they play great Macedonian nationalists and "comites" delighted by Todor and Vancho. These are, in fact, ordinary ideological turncoats and national unfortunates, who, by drooling and historiographical diarrhea in front of today's bigwigs of the anti-Macedonian and anti-communist political parties, are trying to profit financially. And, of course, without any hesitation - they profit handsomely.

In the creation of the revisionist deluge of spittle, the descendants of the fascist-Bulgarian collaborators, those wretches whose grandfathers and uncles remained alive, undeservedly, thanks to the mercy and great virtue of Kolishevsky and the communist ruling structures, who in the form of creating a broad national liberation front, contribute the most to the creation of the revisionist deluge of spittle. , carried out a massive political and criminal amnesty. These neo-fascists, neo-fascists and pro-Bulgarian neo-superarchists, daily spit on the national liberation partisan army and the Macedonian state-makers, unable to accept the shameful national betrayal and hypocrisy of their ancestors. They think, of course in vain, that with slander, with lies about history, with absurd fantasies, packaged as historiographical revisionism, they can change the former defeat experienced by their fascist and anti-Macedonian ancestors into a victory.

The Macedonian People's Liberation Army fulfilled its Macedonian patriotic duty by defeating and expelling from the country the foreign occupiers and domestic traitors and by creating the Democratic Federated Macedonia. It is an unchangeable historical fact that the Macedonian partisan rifle defeated the Tsarboris legions, and ballistic gangs, and Italian military-police paraders, and the powerful divisions of the Wehrmacht, and numerous occupation collaborators from Vancho Mihailov's gangs... Of course, all these victories were won with cooperation of the People's Liberation Army of Yugoslavia, and in the final operations with cooperation with the invincible Red Army, the liberator of humanity from Nazi-fascism.

These days, once again, the pro-Bulgarian supremacists appeared to repeat the lie that the Bulgarian armies participated in the liberation of our seat. They convince us, those anti-Macedonians, that a few years before there was no occupation by the German and Tsarboris fascist hordes, because we were under Great Serbian occupation anyway. The fools think that nobody here has ever heard of the term reoccupation, so they will sell us their small-minded supremacist story. Simply, all normal and literate people know that the Bulgarian occupation cannot be relativized and hidden behind the old Serbian occupation. But these are the same ones who, for decades, have been convincing us that we are not Macedonians, but Bulgarians.

Those who, these days, repeat and rewrite the words of the anti-Macedonian "pop stars" from the east, that we lived in "Yugoslav totalitarianism", that "communists are criminals" and that it is necessary to renounce their state-building heritage. These are the same ones who constantly lie about the ability and numbers of the Macedonian partisan units, about the moral qualities of the Macedonian fighters and partisan leaders, about the invented mass shootings and imprisonments, about some kind of completely hallucinatory terror against the "Bulgarians"... All this would lead to disappearance of Asnom Macedonia, which is the main anti-Macedonian goal.

These days, this human and national scum, who hates everything with a communist and Macedonian connotation, is barking on social networks and in the media, against Kolishevski and the Macedonian communists whose bones were broken in Bulgarian and Serbian prisons and who were mercilessly brutally killed in the Macedonian mountains and streets in the occupied Macedonian cities.

Anti-Macedonian psychopaths, delighted by neo-liberalism and neo-fascism, comment and spit on those dead Macedonian heroes who stood up with a rifle in hand against the almighty Third Reich and its handmaiden - Tsarborisov's Bulgarian soldiers, and glorify Macedonian natives and traitors like Mihajlov, Tatarchev, Drangov, Chkatrov and the rest of the Vmrovist-fascist dregs. They are shaking up the most stupid nonsense and the most magnificent fabrications to justify the rehabilitation of Vancheta and the continuity with his fascist and anti-Macedonian organization. Just as a few years ago, with a caricatured imitation of the Bulgarian historical anti-Macedonian narrative, they justified and carried out the rehabilitation of Vancho's accomplice and comrade, the "legendary" murderer of Gjorce and Sandanski, the extreme Bulgarian lover - Todor Aleksandrov.

But, apart from the semi-literate revisionists who rewrite the Great Bulgarian historical and anti-communist fabrications, these days, the behavior of the neoliberal "brains" on duty is interesting, who are silent about the rehabilitation of the Vanchovists and fascism and, miraculously, have no opinion about it. And they chatter and scream, even, about the "rights" of dogs and cats. Those faceless non-national elitists are silent as fish even about the freedom they enjoy today thanks to those brave Macedonian communists and patriots, who dared to fight and sacrifice eighty years ago. That "pro-European" weak-blooded "elite" of ours, made up of petty opportunists, profiteers and cunning scoundrels, unfortunately, does not even feel a racial moral obligation to defend anti-fascism. And they should have that obligation, because a large part of them, both property and education, are "inheritance" from the benevolence of the former state.

After all, the neoliberal poltroons of the plutocracy, due to their own anti-communism, can ignore it, but they cannot change the truth that the victory in the forty-fourth meant a radical increase in the quality of life and the range of individual freedoms and rights. It was that victory that allowed women in Macedonia to get the right to vote and become completely equal with men, it allowed the population to become completely literate from a level of almost complete illiteracy, it made it possible to carry out industrialization, for which other nations needed for more than a century, it allowed a high cultural-national emancipation to happen by building a network of respective cultural and scientific institutions, it made it possible to build the transport infrastructure that was completely destroyed, it made it possible to provide a free and quality health system for the entire population, it made it possible to introduce self-government, as the highest degree of democratization...

Hence, Macedonian citizens these days should not listen to the rumors that some foreigners liberated us, because that is an insult, not only to the partisan victims of the fight with the occupiers, but also to the Macedonian national honor today. There is no need for anyone to listen to and believe the revisionist liars about the mass crimes committed by the Macedonian state-makers, about the invented "complete dependence on Belgrade", about the idiotic equations between communism and fascism, about the anti-Macedonian small-minded comparisons and parallels of Vancho and Lazo, about mythologies for Cento, Pavel and Panko, who, although orthodox communists, have become contemporary symbols of Macedonian anti-communism.

Macedonian citizens should know that a huge percentage of pre-war and military Macedonian communists sacrificed their lives during the anti-fascist and national liberation struggle, that hundreds of those rebels and national disobedients were imprisoned and tortured in Bulgarian, Italian, Greek and Albanian prisons, and all for to reach national affirmation and freedom. Macedonian citizens should remember these days that the price for freedom and the state is - priceless. That there is no price! Because, it was paid with the lives of the best and most virtuous Macedonian sons. And because, if those values ​​are lost, they cannot be compensated with anything. Therefore, if they truly love their freedom, their nation and their state, all Macedonian citizens should, without exception, always and everywhere, bow before the monuments erected in honor of the Macedonian partisans, with a simple slogan: Glory to the Macedonian anti-fascist victory !

The author is a historian

Whoever pollutes it and "earns" from Shara, will pay

The incident with the HP person, a coincidence or a well-prepared scenario

The importance of forming a committee

Noose around the neck of Macedonia

There is no escape for us, we will not fail

Time for a historical Kosovo unfolding?

Dear Bulgarians, you are welcome at the grave of Gotse Delchev, and we invite you to Vatasha as well