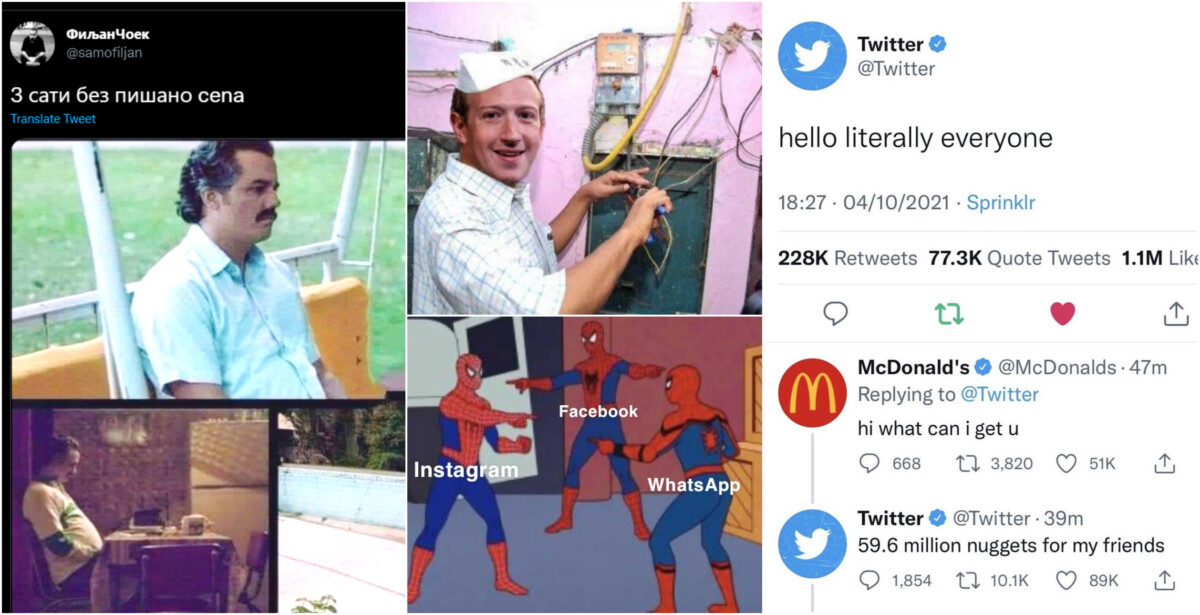 These are the funniest reactions from Twitter users around the world and Macedonia after the fall of Facebook, Instagram and WhatsApp - the world brands joined the jokes / Collage: SP.

The three applications Facebook, Instagram and WhatsApp - which are owned by Facebook and work on a common infrastructure - completely stopped working yesterday, shortly before 18 p.m. Other products that are part of the same family of applications, such as Facebook Workplace, have also stopped working.

Facebook users simply saw that their browser could not connect. WhatsApp and Instagram continued to work, but did not display new content, including messages sent or received during troubleshooting.

Millions of users were affected, and the blockage occurred due to a change in configuration. The error occurred on routers that coordinate the flow of information between Facebook and the servers, according to a blog today. Because of the malfunction of both internal systems and software tools, it was difficult to quickly diagnose and resolve the issue. The complete break lasted a total of about six hours.

The explanation on Facebook coincides with the assumptions of Internet experts that the fault lies with the infrastructure in the concern itself. Facebook emphasizes that it does not have any indications that due to the interruption of the services, the data of the users are endangered.

"This is not a hacking attack, but a human error with the configuration of Facebook's DNS system," Marko Rakar, a communications and IT expert, told jutarnji.hr.

Facebook outages are relatively rare, but they have a huge impact. The company is often cryptic about the causes of any problems and does not tend to explain them even after they have been fixed. In 2019, for example, it experienced the biggest disruption in recent years - and only said it "caused a problem" during "routine maintenance operations".

Matching the fall with the whistleblower discovery

The interruption came in the morning after the segment "60 minutes" aired a segment in which Facebook whistleblower Francis Hogen claims the company is aware of how its platforms are being used to spread hatred, violence and misinformation, and that Facebook tried to hide that evidence. Facebook has denied the allegations.

The interview followed weeks of reporting and criticism of Facebook after Hogen released thousands of pages of internal documents to regulators and the Wall Street Journal. Haugen is due to testify before a Senate subcommittee on Tuesday.

The crash of these applications caused the biggest traffic on the social network Twitter so far, where there was a real "madness" of reactions, so as expected, the goal twitter tamillan was flooded with mimes. Take a look at the funniest:

Mark Zuckerberg watching all the disaster that he caused #facebookdown #instagramdown #whatsappdown pic.twitter.com/LX0SV42qL8

Le Mark Zuckerberg trying to fix WhatsApp, Facebook and Instagram servers after knowing that they'll be down pic.twitter.com/C8dfBgVjGu

People returning to Facebook after it's back #facebookdown pic.twitter.com/aBYWTINo4v

And global brands took the opportunity to joke on Facebook:

hi what can i get u

I have a picture to put hello pic.twitter.com/3zq0f76NAs

I do not care about Facebook being down. I am literally a building.

Pizza's a good way to pass the time too

I have not lit a fire for 4 hours pic.twitter.com/1LdFuBK6Uw

# Once from face and insta you are entering twitter for the first time. pic.twitter.com/2gXExxEanU

I have a picture to put hello pic.twitter.com/3zq0f76NAs

"Everyone can take the side" - State Election Commission

I will keep this to laugh in difficult moments pic.twitter.com/DsjiQY7Inb

It occurred to me pic.twitter.com/yGdl2t659L

When you only have sympathy on insta pic.twitter.com/LsjnAhDxlG

Finally, at the expense of the drop in applications, we се are joking 🙂

Guys, this is the perfect time to remind you - to buy a newspaper in the morning 🙂 🙂

PHOTO | Four "unhappy" wedding dresses that should be forgotten

What is your favorite coffee? Here's what choosing this "magic" potion says for you!

Joke of the day: Infidelity

Tomorrow, an Art Garden will be held in the Social Garden in Lisice: The fig garden will be open for everyone!