Bujar Osmani and Kiril Petkov addressed the MPs: A good opportunity to compete in patriotism 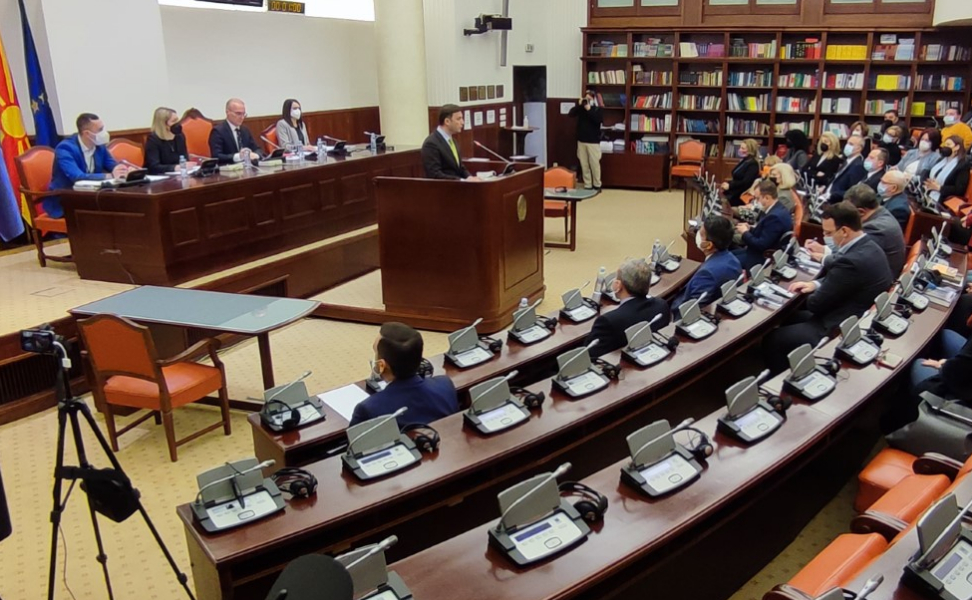 Bujar Osmani in his speech before the members of the Foreign Policy Committee of the Assembly of Northern Macedonia / Photo: MIA

"No one can make any decision alone, overnight, behind the curtains, without the knowledge of the citizens, to the detriment of our state positions set by the declaration of the Assembly, and the Macedonian identity has neither been negotiated nor will be negotiated," Osmani said.

After the government meetings in Skopje and Sofia, Minister of Foreign Affairs Bujar Osmani yesterday reported before the Parliamentary Committee on Foreign Affairs, a Bulgarian Prime Minister Kiril Petkov before the Bulgarian MPs on the content of the talks between the two countries, where both assured that the red lines are not crossed. According to Osmani, no one negotiates and has no right to negotiate on identity issues. According to Petkov, talks on the Macedonian minority in Bulgaria are neither required nor accepted, and the Bulgarians will enter the Macedonian Constitution.

- Language and other identity attributes are issues that arise from the right of self-determination of every person, people, state and it is an inalienable right and for them we have no right to negotiate, nor will anyone ever negotiate - underlined Osmani.

The MPs from the opposition VMRO-DPMNE insisted that the minister reveal the Macedonian answers to the Bulgarian demands "five plus one", but Osmani did not do that, because, as he said, there is nothing spectacular there, and not everything was completely agreed.

In the past, Osmani said, there may have been attempts to deny the identity of Macedonians when theses were presented in Bulgaria as "one people in two countries", which is an attempt to impose a single view of historical truth, but through a rational and reasoned approach we succeeded. to show that these are retrograde phenomena. The Minister explained that today we are no longer talking about identity, but only "about the approach to determining the right of everyone to self-determination, in accordance with the existing state order in both countries."

Osmani pointed out that "a slight hysteria is spreading that ad hoc solutions are possible for such sensitive issues", but said that no one alone, overnight, behind the curtains, without the knowledge of the citizens, could make any decision to the detriment of our state positions set by the declaration of the Assembly.

- Every issue goes through several filters, these are the experts and diplomats in the Ministry of Foreign Affairs, then the Government, where we make decisions together, this Commission and the Assembly in general, and finally the citizens. The most sensitive issues are not the subject of political negotiations, but they are the subject of discussions between experts in the Joint Committee on Historical and Educational Affairs, which is an independent body in whose work we can neither try nor try to interfere. For us, the most important issue in that package is the implementation of the decision of the European Council from March 2020, through the First Intergovernmental Conference, and our key position is in the negotiating framework for the Macedonian language to be treated as an official language of the EU, without any additional qualifications and questions asked by Bulgaria - explained Osmani.

In the "five plus one" package, reminded Osmani, are also the issues of the principle of self-determination, according to the constitutional regulations of the states, the issue of hate speech and the rehabilitation of the victims of communism and in these political issues, as he said, there is nothing to be afraid of citizens. They are currently in the phase of exchanging ideas, non-papers, working documents, and even ordinary conversations, and that is why, said Osmani, "we are still not able to present them here and as soon as those working versions become acceptable to both parties, in writing will be submitted to the MPs. "

VMRO-DPMNE: The Minister to submit the documents

Opposition lawmakers were unhappy with Minister Osmani's speeches, demanding access to documents being exchanged with Sofia and accusing the talks of being held in secret. Commission President Antonio Milososki asked why the Frontex agreement is not signed if there is good will from Bulgaria. He criticized that it is not possible to build trust in the process when the Government does not give information to the elected MPs, ie it gives us neither the right nor the confidence as MPs to give a suggestion for those non-papers. He demanded that the documents be submitted to them in a closed session to give well-intentioned indications, because, as he said, the state gave them full confidence by giving them state certificates for access to every state secret, no matter how classified. MP Aleksandar Nikoloski said that the Macedonian public is well aware that the previous two prime ministers of Macedonia and Bulgaria had an agreement that was completely one-way and only to us in terms of commitments.

- Your legitimacy comes from the MPs, you should inform here, because that way you will build consensus. "If I find out on TV about the note you sent to the United Nations, then I have a problem," he said. MP Gordana Siljanovska-Davkova.

She criticizes President Stevo Pendarovski for not participating in the process with Sofia, although he has competencies in foreign affairs, as well as the opportunity to address the Parliament once a month, which he does not use.

Petkov: We also talked about the Framework position

Bulgarian Prime Minister Petkov told Bulgarian lawmakers that the new Macedonian Prime Minister, Dimitar Kovachevski, had been prime minister of RS Macedonia for a week and spent four of the eight days with the Bulgarian government, indicating a desire to get the job done. He assessed that great progress has been made in several areas with three signed memoranda of cooperation, including Corridor 8, which, as he said, has been dropped from the list of European projects, and if we want to include it, it will happen through joint work.

He said that during the talks on the economy and infrastructure, the two sides also discussed topics that are important for Bulgaria, namely the rights of Bulgarians in RS Macedonia and the Framework Position of Bulgaria. He did not reveal more details about this, except that Kovacevski said that he did not see a problem with the inclusion of Bulgarians in the Constitution, but did not commit to time, and now the deadline is being discussed.

According to Petkov, there are many declarations from both sides, but the real work is not done.

- We organized a calendar for meetings every seven days. I am glad that even the Historical Commission has confirmed that they will have three meetings in the coming months. "I do not intend to change any of its members," he said.

Prime Minister Petkov said that European partners do not understand historical bilateral issues and that is why Bulgaria has decided to rely on understandable principles such as discrimination of Macedonian citizens with Bulgarian identity and hate speech against Bulgaria.

- We have seen that when it comes to this, Europeans are beginning to understand us. We want these common principles to be respected by all, including countries wishing to become members of the Union. Let's eliminate discrimination against Bulgarians who are in RSM - said Petkov.

Petkov focused on economic ties as a long-term guarantor of good neighborliness and announced that in March the airline will fly on the route Sofia - Skopje and that this year they will build the 13 kilometers that are not built to the Klepalo crossing, and announced that the European Commission is ready. to support the railway project because it is strategic.

MP Ekaterina Zaharieva answered Petkov to reduce the enthusiasm because while she was at the Ministry of Foreign Affairs, she signed 20 memoranda with RS Macedonia and most of them remained on paper, ie they were not realized by Skopje.

- Lower, you will raise the ramp very high and then you will have to explain. This is friendly advice, not hostile - Zaharieva told Petkov.

VIDEO | Hodzic: Bulgarians in Macedonia are only interested in a true interpretation of history