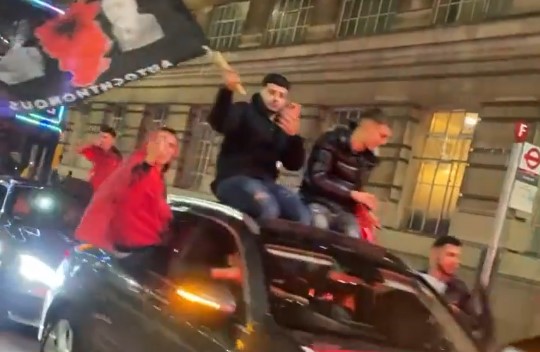 "The police have been notified that a large group of vehicles is gathering on certain roads. "Our officers immediately went to the field in order to minimize the possibility of traffic disruption," the police said in a statement. From there, they add that one person was detained during the police action.

While men in cars whistled and drifted, girls in folk costumes performed traditional folk dances, and firecrackers were thrown. The videos and photos on social networks caused an uproar among other Londoners," writes "Daily Mail".

He also gave his comment Nigel Farage, the British right-wing politician and one of the most ardent supporters of Brexit. "This was happening last night in London. God help us," Farage wrote on Twitter.

This was last night in London. God help us. https://t.co/bqrfSEWpGD

Albanians who entered Britain as illegal immigrants are a hot political topic in the country these days. Authorities announced today that the state will track all asylum seekers from countries deemed safe, including Albania, and remove them as soon as possible. This is the new strategy Britain will implement to crack down on immigration.

The British "Times" writes that the Minister of Internal Affairs Suella Braverman seeks to revive the list of so-called "safe" countries, for citizens whose asylum claims are generally considered unfounded. If the application is denied, the immigrants will not have the right to appeal. Another option understood to be under consideration is to refuse entry to all male asylum seekers from countries on both lists and treat their claims as "manifestly unfounded", but to allow the claims of women and children from those countries to progress normally. During this year, more than 12.000 Albanians arrived in Britain illegally.

Creepy case in Germany: Girl found another person who looked like her and killed her to fake her own death

The war will end most easily if Putin withdraws the army, Borel says