Bytyqi-Doer Voss: German support for economic reforms is one of the most important for the country 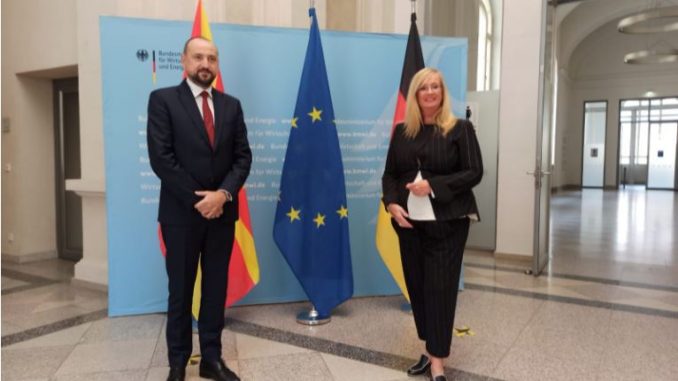 Economic cooperation between Northern Macedonia and Germany was the main topic of discussion at the working meeting in Berlin of the Deputy Prime Minister in charge of Economic Affairs Fatmir Bytyqi with the State Secretary at the German Federal Ministry of Economy and Energy, Claudia Doer Voss / Photo: Government of RSM

Economic co-operation between Northern Macedonia and Germany was the main topic of discussion at a working meeting in Berlin by Deputy Prime Minister for Economic Affairs Fatmir Bytyqi with Secretary of State at the German Federal Ministry of Economy and Energy Claudia Doer Voss.

Deputy Prime Minister Bytyqi, who is on a working visit to Berlin, stressed at the meeting that German support is one of the most important for the country, especially when it comes to economic reforms.

Bytyqi, as his cabinet announced, concluded that the economic cooperation of the country with Germany is at an extremely high level.

- Traditionally, this country is the first trade partner of the Republic of Northern Macedonia, as a consequence of a large number of direct investments of companies from Germany. The process of "near-shoring" was emphasized, which means relocation of a large part of the production of companies from highly developed countries that had their own facilities in the Far East in their immediate vicinity, and Northern Macedonia is certainly one of the destinations where part of this production. will be transferred, is stated in the statement.

They inform that at the meeting Deputy Prime Minister Bytyqi presented the steps taken to develop a 20-year National Development Strategy of the country until 2041, which will cover all aspects of social life, which should ensure sustainable economic growth.

Deputy Prime Minister Bytyqi and Secretary of State Doer Voss defined energy, industry, environmental protection and the implementation of structural reforms in the economy as areas where co-operation could be further enhanced.

They concluded that one of the concrete measures that will directly help investors, especially those from the processing industry, which is part of the government program, is the change of the customs tariff and its adjustment to customs rates in the EU.

They paid for firewood this summer, but it never reached them

Interview: Elena Pocev, Director of Halkbank Deposit Management Department: The constant growth of deposits confirms the great trust of the clients in Halkbank

Energy crisis: Germans learn to cook without electricity, our winning combination is a wood stove