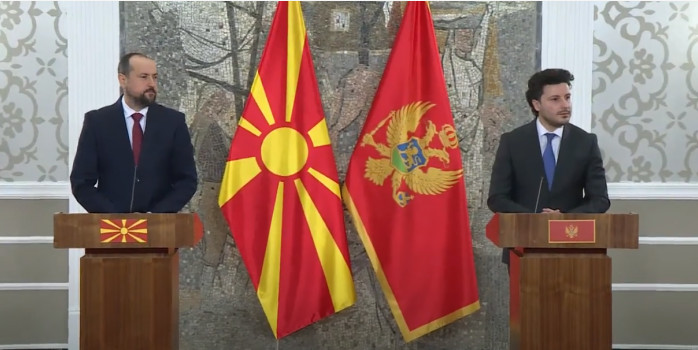 Relations between Northern Macedonia and Montenegro are at an enviable level, and can serve as an example of relations to be developed between all countries in the Western Balkans. These relations should continue to be built, with even greater cooperation, especially in the economic sphere in order to better standardize the citizens of both countries. The two countries should also support regional initiatives and cooperation as an additional stimulus in accelerating the European integration processes.

- We really have a lot in common topics for discussion. We live in the same region. We have the same aspirations and face similar challenges. During his working visit to Northern Macedonia in March this year, Vice President Abazovi. Pledged that we would continue our strong efforts to intensify the relationship between our two countries in order to develop the entire region of the Western Balkans. The message we sent at our previous joint press conference in Skopje was regional competitiveness versus regional competition. To this end, we have exchanged and are exchanging experiences to improve and strengthen the business environment not only of our national economies, but also to create high added value of business in a wider context of the entire Western Balkans region. said Bytyqi at the press conference after the meeting.

According to him, the region of the Western Balkans has an excellent chance to use its advantages in this post-war period and to be placed on the world map as a peaceful and stable region in which everyone cooperates and shares the same democratic values.

- We should grow into an example of a competitive region that is constantly increasing its share in the world economy and which will be attractive to investors. We are all relatively small countries with limited markets and capacities, but together we are already becoming an attractive and attractive destination for investors. We must understand that many European companies have learned the lesson from KOVID-19 and are considering bringing supply chains closer to their borders, and at the EU borders we are the ones. said the Deputy Prime Minister.

He informed that at today's meeting they agreed that all companies in the region, every country in the Western Balkans should be treated as domestic companies, ie countries to equalize the conditions they receive with their policies.

Additionally, by introducing affirmative and stimulating measures, we should encourage them to connect with each other and together create a strong value chain throughout the region. The refocus on stimulating investments in the Western Balkans market will create a resilient and stable regional market that will be competitive in the European and world markets, and at the same time will support and certainly grow and strengthen national economies. Strong value chains are the competitive advantage of the Western Balkans in the post-war period, said Deputy Prime Minister Bytyqi.

After the meeting, the Deputy Prime Minister of Montenegro Abazovi. Said that the relations between Northern Macedonia and Montenegro are at an enviable level and that they can serve as an example of relations that should be developed between all countries in the Western Balkans.

- Our idea and desire is and ambition is to have the relations we have with Northern Macedonia with other countries. We should continue to work on the cooperation between the two Governments and thus send a different picture and, in my opinion, a very positive message from the countries of the Western Balkans that we can cooperate, be friends and not see each other as competitors. but as partners and brothers and sisters, said Abazovic.

He added that at today's meeting they discussed the economy and regional connectivity as an important political aspect for the overall integration of the two countries into the EU.

- I think that we should increase mutual trust, to support regional initiatives, we should try to remove all barriers that exist in the Western Balkans, but also to do everything in the future to treat this zone as one in economic terms, he said.

Regarding regional co-operation, he stressed that it could not harm anyone.

- I think it is a negative political story that revolves here as a mantra that it might endanger the identity of a country and disrupt relations within the country. On the contrary, fewer borders, barriers, administration, greater cooperation, greater mobility, easier access, joint application for regional projects, especially in infrastructure and energy, would be beneficial for all of us, said Abazovic, answering the question whether support for regional initiatives means support for Open Balkan.

This, he said, is my personal position. According to him, Northern Macedonia is part of this initiative and for the country it is not a substitute for the EU, but a way to get there faster.

Bytyqi, as announced today by his cabinet, will participate in the "Summit of Heads of Government of the Central European Initiative". During the Summit, Deputy Prime Minister Bytyqi will take part in a special event, "Roadmap for the Health and Welfare of the Western Balkans", in the "Plenary Session of the Heads of Government of the Central European Initiative", as well as in the panel that will discuss the post-pandemic future in Europe.
During his visit to Montenegro, Bytyqi will also meet with the Minister of Finance and Social Welfare, Milojko Spajic.

Prices of basic products will remain frozen in February