Bejeti admits: There were administrative errors in issuing 200 certificates, but only for a certain period 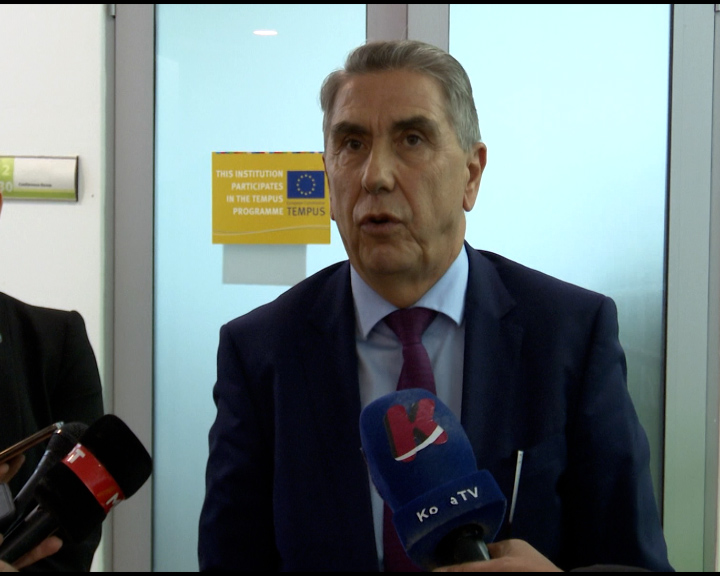 The rector of the University of Southeast Europe, Abdulmenaf Bejeti, said today that in the period from 2011 to 2012, certificates were issued at the university, in which there was an administrative error, that is, the degree of education was wrongly stated. But it was not about diplomas, but about certificates.

Rector Bejeti gave the answer to a journalist's question, after yesterday the President of the State Commission for the Prevention of Corruption, Biljana Ivanovska, informed the public that they had turned to the Education Inspectorate to check how many students of SEE have completed three years and received 7/1 degree of education, i.e. four years of studies.

"In the period from 2008 to 2010, the state did not regulate the professions in that part by decree. Since November 2010, the decree, i.e. the decision that enters into force, has been adopted, where the titles of the titles and the differences between the seventh degree and the sixth degree are identified. But it's not that diplomas have been issued, but certificates have been issued in our country, which state the number of transfer European ECTS credits, where it is written that there are exactly 180 ECTS credits, which means three-year studies, but someone wants to interpret them that way, only to mislead in some way. Some of the allegations are correct, because from 2011, when the application of the decision began, between 2011 and 2012 there were such cases where certificates were issued with the wrong indication of the title, that is, the title 7/1. But then in the period that follows everything is fine, so essentially there is no error, but there is a technical administrative error in that part and not the whole period and it is not that number 427, but about 200, but they are not diplomas, but certificates, said the rector of SEEU, Abdulmenaf Bejeti.

At today's presentation of the "Transition and Fake News" project, Bedjeti characterized the information that came out to the public about SEEE as a half-truth. He pointed out that we should all fight against fake news, because they represent a serious risk for the states.

"In countries like ours with less developed institutions, where the media activity is not sufficiently regulated, space is created for the expansion of more and more fake news, which in some way cause security risks for the state and the region. So the University, as a participant in the project, will be a partner for the development of similar projects," said Abdulemanaf Bejeti.

But freedom of speech also has its limits. In certain cases, it is necessary to intervene, according to the prescribed norms and laws.

"This is a very important issue and I think that some efforts are already being made to reflect it in the laws. But we should be careful, because we are talking about the freedom of expression, and that freedom cannot be organic, in the name of protection from fake news. That's why this project and that's why these activities are of vital importance in universities and in educational institutions, because the way we react to fake news, disinformation, should be the basis of education in the education system and in the ability of young people to they recognize fake news. You cannot stop that freedom, limit that freedom, because the basis is the freedom of man. Of course that freedom has its limits and there is responsibility when it is abused, but the way in which this issue is approached in the world is through education and through empowering young people to identify those fake news," Arifi said.

The project "Transition and fake news" is implemented in the country with the support of the Czech Republic.

AA will get a deputy prime minister and ministers of justice and health, directors of Customs, IRS and Financial Police?