A baby rhino and a zebra were found as orphans: They became inseparable friends 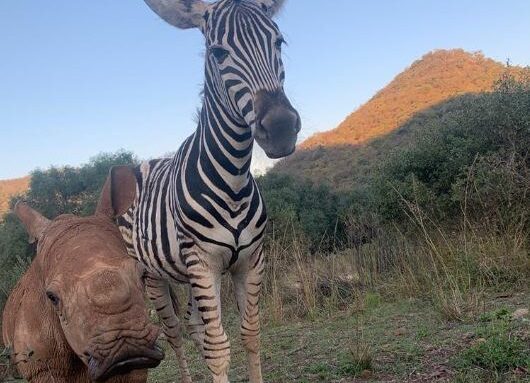 After being rescued as orphans in the wild, one rhino and one zebra formed a very unusual friendship. Seven-month-old Daisy the rhino and Mojaji the zebra ended up in an animal shelter in South Africa. Inseparable friends caress each other, go for walks and even eat together.

"This little zebra has always been there for Daisy the rhino. "Even though Mojaji herself is a baby, just over eight weeks old, who drinks milk every three hours, she watches over and cares for the orphaned rhino," reads the description of the sanctuary's post from January.

A post shared by Care For Wild Rhino Sanctuary (@careforwild)

Daisy was rescued in early December. She was only 12 hours old. She could not stand, had an infection in her navel, was extremely weak and vulnerable. She received plasma and spent several months in the Intensive Care Unit.

A post shared by Care For Wild Rhino Sanctuary (@careforwild)

The sanctuary's long-term goal is to release Daisy and Mojaji into their natural ecosystems.

"Although Daisy will eventually join the other rhinos and Mojaji will return to the zebra herd, their unique friendship will always be a vital part of their path during rehabilitation," said the people who are now caring for them.

A dietary supplement that causes insomnia and sometimes nightmares

Russian astrologer predicts: These zodiac signs will have the best luck in 2023