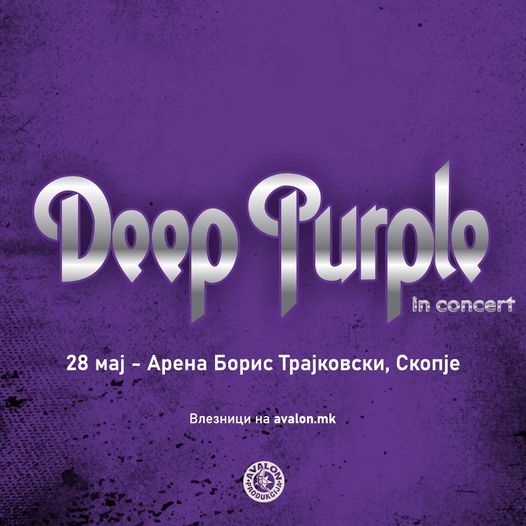 Due to the announced rainy weather on May 27th and 28th, and in consultation with the management of DEEP PURPLE, we decided on a safe option - transferring the concert to the arena "Boris Trajkovski", the same day, Saturday, May 28th. announced the organizer of the concert Avalon on his Facebook page.

-It is actually great news, because everyone with tickets purchased so far, as well as all those who will buy from now on, will be able to choose whether they want to watch the concert from sitting or standing, according to this schedule: FAN PIT: Anyone who has purchased fan pit tickets can stand in their favorite zone - in front of the stage or sit in the other unnumbered stands - of their choice. GROUND FLOOR: All those who have purchased ground floor tickets can stand in the ground floor area or sit on the other unnumbered stands - of their choice. VIP: All those who have bought VIP tickets will be able to sit in the VIP stand (block 13), explains Avalon.

They add that this fulfills the wish of many and all those who asked if there would be chairs or stands at the ARM stadium, which was impossible there.

-Now the new location, and it is possible. Namely, for sale according to the capacity of the arena "Boris Trajkovski" there are another 1.500 tickets that will be sold until the concert on the same principle (ground floor and fan pit), but with those tickets you can sit, of course at the request of the buyer. See you in four days with even more energy, but in a new location !, announced from Avalon.

PHOTO | On the creative threshing floor in the village of Sloeštica: The dream is never as beautiful as being here