AUDIO TESTIMONY Valentina Pesic: In the Kumanovo modular hospital they took bribes to put on my grandfather who died! 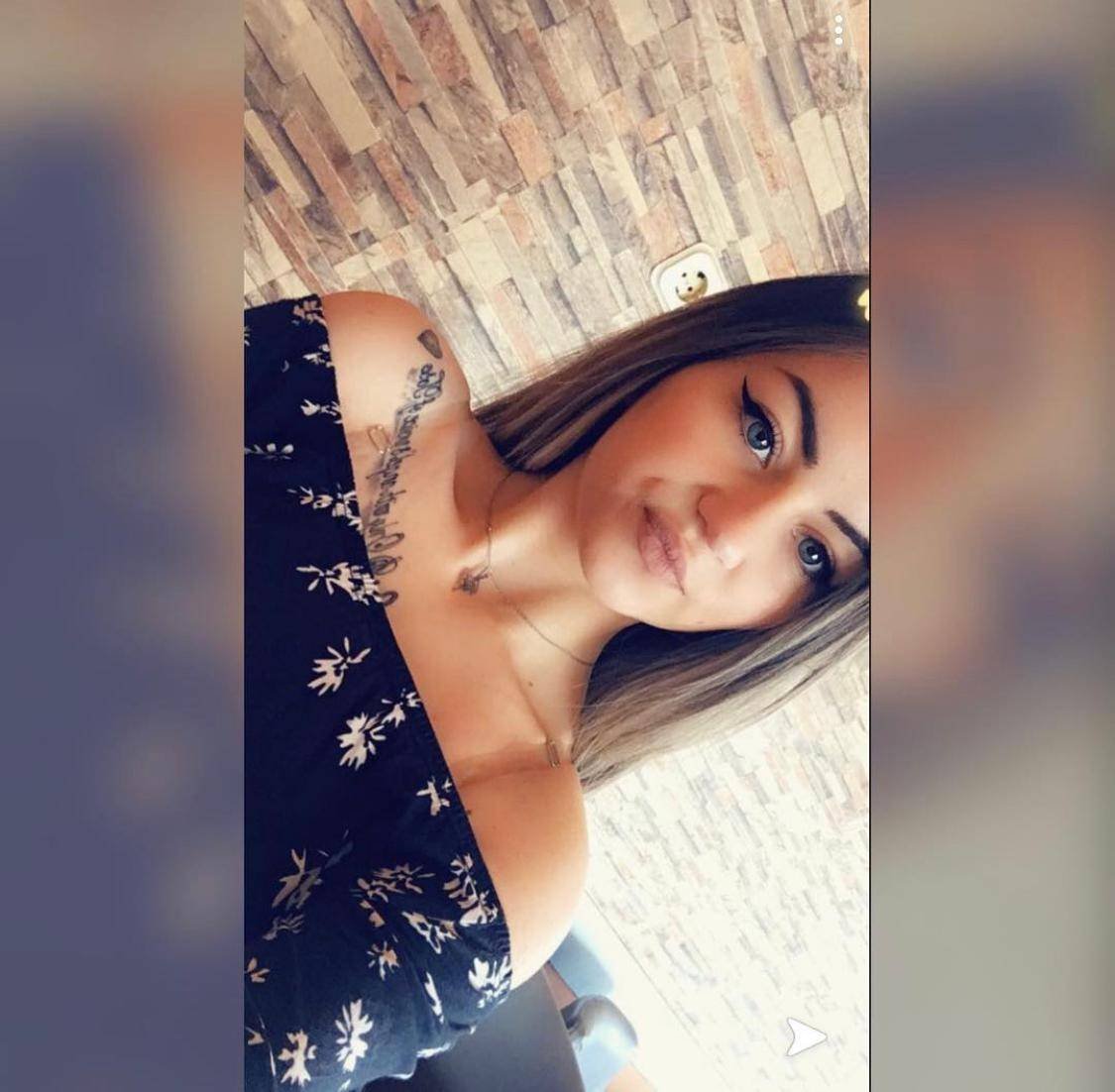 After her grandfather died in the Kumanovo modular covid hospital, the paramedics demanded a bribe of 3 thousand denars to put him on, and the hospital did not allow the family to choose which funeral company to send the deceased to eternal rest, testifies for "Free Press" Kumanovo Valentina Pesic. According to Pesic, the hospital claimed that it cooperated with only one funeral company and that the funeral and the protocol part regarding the removal of the deceased from the hospital building had to take place exclusively through that funeral company.

As we have learned, the State Sanitary and Health Inspectorate (SSHI) will be involved in the case, because dressing the deceased in the covid centers is not allowed.

- They told us that we should pay them 3 thousand denars in advance to dress my grandfather. My mother asked if she could give two thousand denars, because she was not carrying more money with her at the moment. They rejected her. Then we told them that the funeral home would be dressed by my grandfather. And they refused. We were told that they would call a funeral company, that they had cooperated with only one, and that no one other than him had brought the dead from the coffin. "We were confused, but because we were in shock, my mother gave me two thousand denars, and they did not even confirm that she had paid," Pesic told Sloboden Pecat.

Our editorial office publishes the complete audio material of her testimony below. In it, she tells through tears that her grandfather died without water and food.

LISTEN TO THE AUDIO TESTIMONY ON FOOT HERE:

The director of the hospital, Dr. Snezana Zaharieva, was shocked by the event. She told Sloboden Pecat that she would file criminal charges to find out who was asking for a bribe at the hospital, and stressed that her personal order was to display (and have been shown) all telephone numbers from all funeral homes in the covid center so that the family to choose. 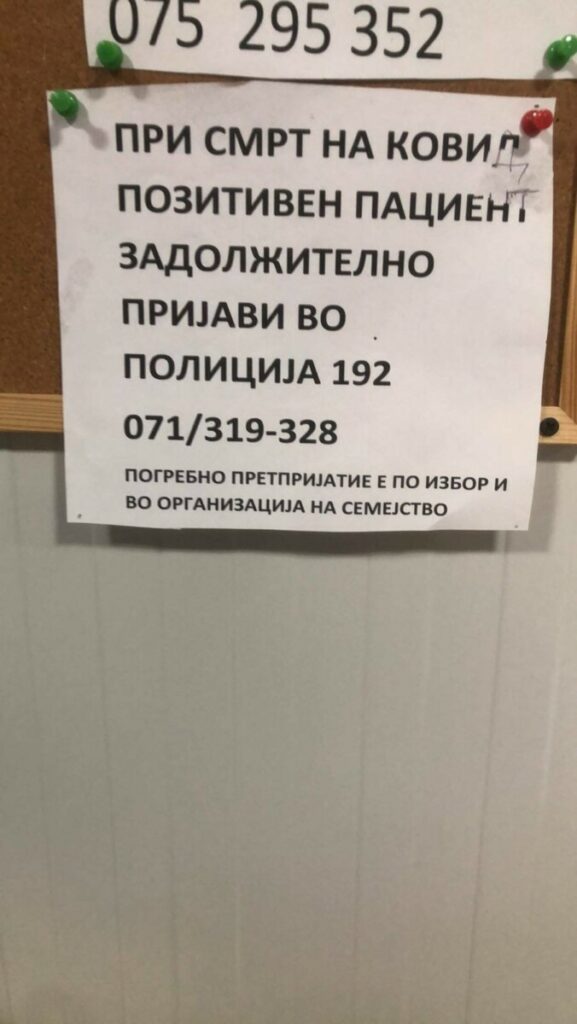 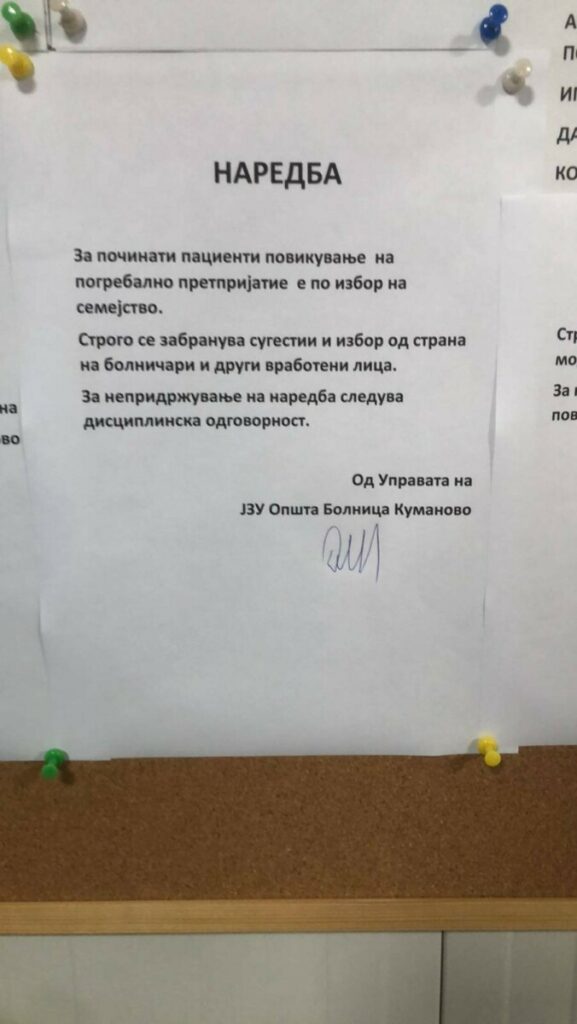 For her, it is absolutely inadmissible and a violation of the clinic's reputation to favor any funeral company. She announced sanctions if our interlocutor's claim proves to be true.

- I will inquire about all the legal possibilities to see what possibilities are available to me, I will personally engage in the case, said Dr. Zaharieva.

Georgieski: Pecakov tramples on nature and all legal norms, he wants to take the beaches from the citizens and return them to the hands of profiteers

Iliev: The decision of the Administrative Court on the ballots is a precedent

SAO: All participants in the local elections should submit a report on the received donations for campaign financing

Jakimovski: Reconstruction of all sports playgrounds in the municipality of Karpos

MoH: A total of 1.604.833 doses of vaccines were applied, and 46% of the adult citizens in the country were revaccinated

Shilegov: Why does Arsovska continue to lie to the public that she does not have Bulgarian citizenship?