Asani called Mayor Arsovska: Only axes and saws suit them, the tree planted by Mother Teresa could have been repaired 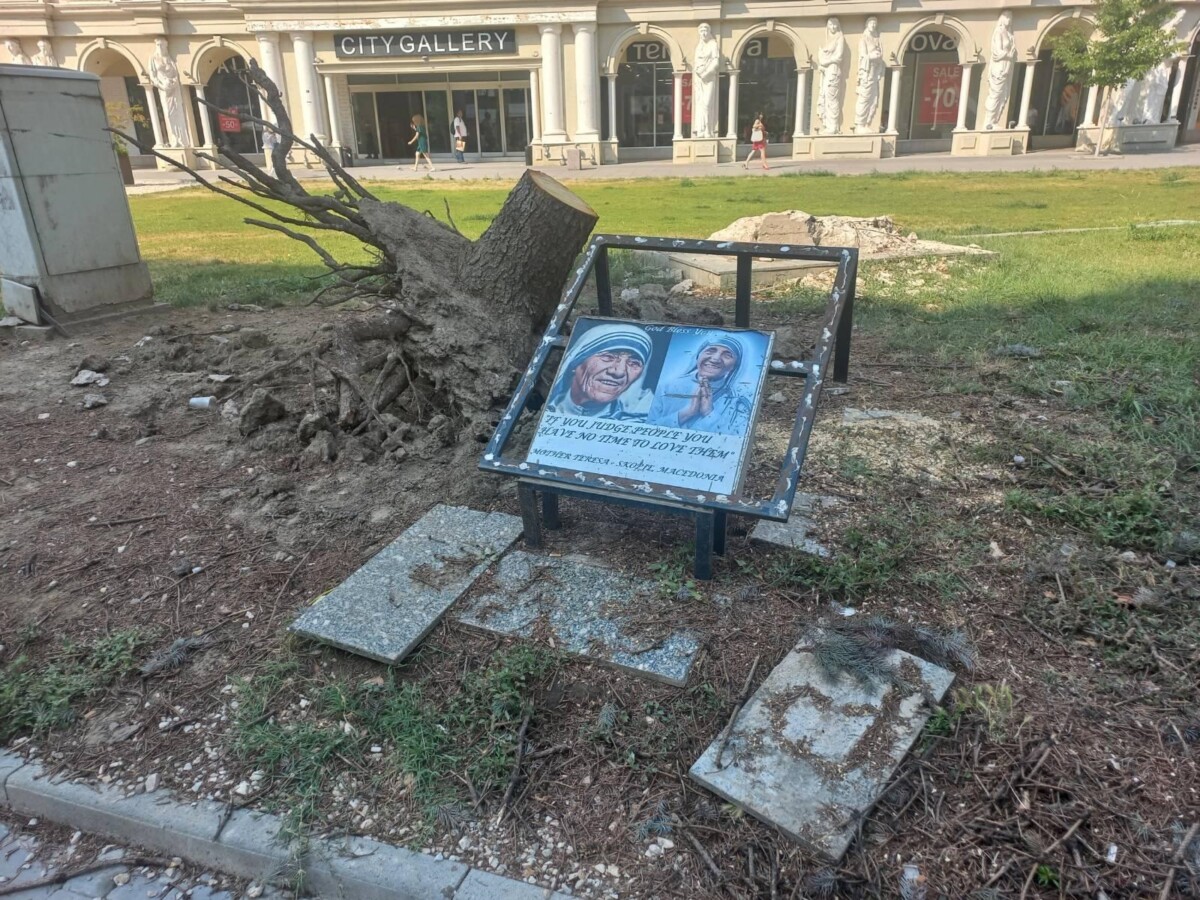 The tree planted by Mother Teresa 40 years ago on the occasion of her last visit to Skopje in 1980 could have been repaired, and now someone is trying to destroy its activity, the director of the Institute for the Institute for spiritual and cultural heritage of the Albanians (IDKNA), Skender Asani.

- In the democratic-Western world, where we as a society and state aim to integrate, Asani pointed out, even certain trees in the cities have the status of cultural-historical monuments. - There, these trees are identified with great care, they are protected from rodents and various insects, they are treated from many diseases, they are revitalized and no one dares to harm them because by doing so they are committing a crime. A few days ago, the strong wind uprooted Mother Teresa's Christmas tree and we as an Institute appealed for maximum care with this Christmas tree, because we hoped that together with the City of Skopje we would find a common language regarding the replanting of this Christmas tree in the place of the old one , he said.

Asani emphasizes that instead of being saved from further damage, the Christmas tree was cut and broken into several pieces by PE "Parkovi i Zelenilo".

- This Public Enterprise of the City of Skopje, completely disregarding our professional requests and suggestions, grossly violated the historical and cultural element of the heritage of Gonje Bojadziu - Mother Teresa, for the reason that, apart from the fact that the Christmas tree was planted by the hand of Mother Teresa herself, she it also marks the place where her birth house was. Also, by destroying this Christmas tree, the City of Skopje, with or without intention, also uproots the sentiment towards a community that is in danger of its assimilation, such as the Catholics of Skopje. The latter do not even have Mass in the Albanian language, but this problem will also be solved by appointing a priest who will hold Mass in the mother tongue of the Catholics from Skopje. Our subsequent requests to Ms. Arsovska, for a consultative meeting, are answered only by axes and saws, which she commands through PE "Parkovi i Zelenilo", he pointed out.

Asani said that IDKNA considers that the legacy of Gonje Bojadziu-Mother Teresa is extensive and should be preserved, but also the plaque that was damaged, and, as he indicated, the authorities of the City of Skopje have not yet given the correct clue to the epilogue of the investigations. regarding the perpetrators of this heinous act.

- It is sad that a public enterprise of the City of Skopje, such as "Parks and greenery" can be so merciless towards the trees that are a symbol of Skopje, and how is it possible that the leaders of this enterprise decided so quickly on the fate of this Christmas tree, without prior consultation with various experts. To make the absurdity even greater, the director of this PE gives a ridiculous and unconvincing explanation that it was allegedly impossible to return this spruce to its previous place, although the truth is completely different because the situation could have been rectified and the complete destruction of this historic tree could have been prevented . Replanting this Christmas tree could be done without any problem, because all the prerequisites for such a thing existed, it was enough just to insert it a little deeper than before. There are many cases in the world where trees are moved and this is done without any problem, because there are all the bio-vegetative prerequisites for such trees to regenerate again, he said..

Yesterday, the Austrian ambassador Georg Wotsas came to the square where the Christmas tree was uprooted and with his staff participated in collecting the branches of the destroyed Christmas tree, so that a new Christmas tree could be renewed from its seeds in the same place.

- With this gesture, the Austrian ambassador, in addition to showing solidarity with the IDCNA rebellion for the damages caused to the legacy of Gonje Bojajiu - Mother Teresa, he simultaneously sent the message of peace and reconciliation, which was also the mission of Mother Teresa herself. The idea of ​​collecting the branches of this destroyed Christmas tree and preserving them as a relic that would also serve as seeds for planting a new Christmas tree best expresses the essence of this message of the Austrian ambassador, IDKNA announced yesterday and expressed public thanks to him.

Immediately after the cutting of the Christmas tree, the NU Memorial House of Mother Teresa reacted and asked to plant a new one in the immediate vicinity.

- We expected that the local authorities from the City of Skopje would organize themselves and return the fir tree to its place. However, something completely unexpected happened
for the general public. Someone took it upon themselves to cut the tree without coordinating with the competent institutions from the city of Skopje. We, NU Memorial House of Mother Teresa - Skopje ask who gave the person the right to do this unacceptable act and we strongly condemn this inhumane, inhuman and idiotic act and we expect the authorities from the City of Skopje to preserve the rest of the fir and her return to the old place. We also expect and request that a new one be planted in the immediate vicinity, they said from there.

In honor of Mother Teresa, a new tree will be planted in place of the fallen tree

A new multi-functional playground was put into use in Triangle

After five years, the account of the Municipality of Karposh was unblocked, the debt reduced by 4 million euros