Conversation with Sofia Stojanovska: It's powerful to be a woman in the world of Brazilian Jiu-Jitsu
"Points" do not solve the problem of stray dogs in Tetovo, packs attack people every day in the streets
VIDEO INTERVIEW | Metodi Hadji-Yanev: Western tanks are insignificant compared to what Russia has
Dichev for "Sloboden Pechat": The names of the cultural clubs are a provocation, and the withdrawal of Ambassador Angelov is unreasonable
VIDEO INTERVIEW | Orce Gjorgjievski: Institutions are sleeping, don't make a circus with air pollution in Kisela Voda

The Albanian flag is flown at half-mast in Skopje 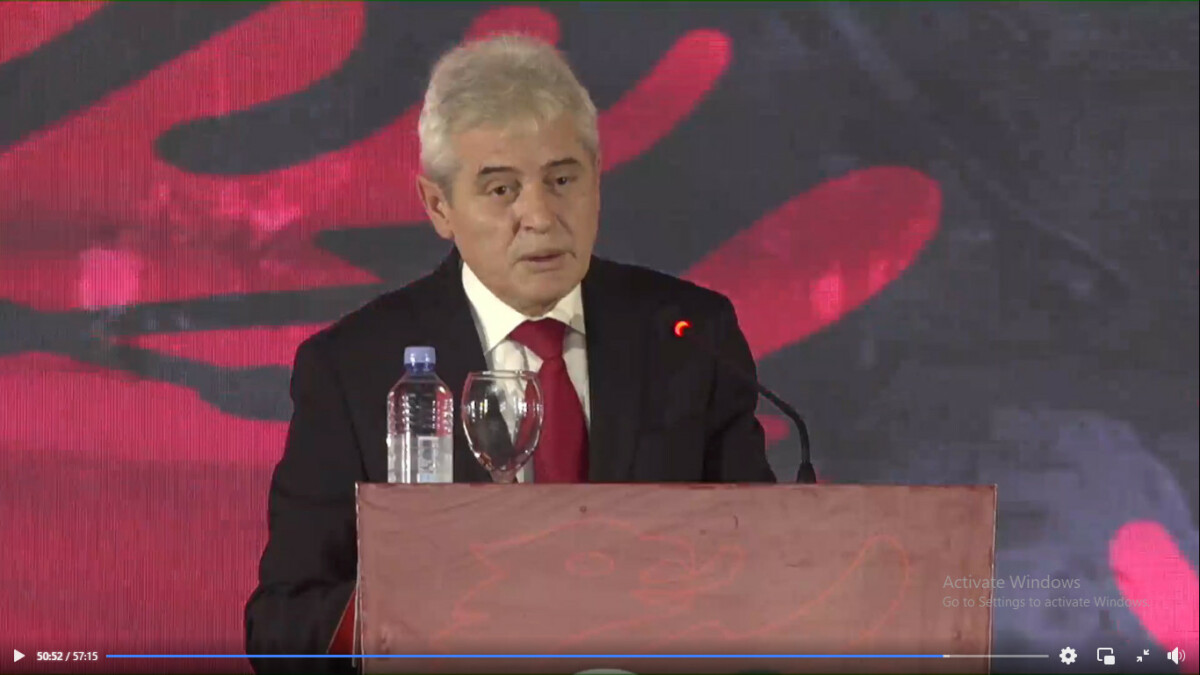 With the unveiling of a bust of a fallen member of the KLA in Shipkovica, the beginning of the reconstruction of the "Mother Teresa" University in Skopje, a formal academy in the "Aleksandar Palace" hotel, the celebration of the birthday of the commander of the KLA, Adem Jashari, concluding with a concert by the British star with Kosovo origin Dua Lipa in "Skenderbeg" square in Tirana, the leader of DUI Ali Ahmeti and numerous integrationist officials marked and celebrated "November 28 - Day of the Albanian Flag", although in Macedonia that date is not on the list of public holidays.

MPs and officials from DUI on a working day, instead of committee hearings and in ministerial offices or in the field, attended the installation of the beginning of the reconstruction of "Mother Teresa" University, after which a whole group of MPs, the Speaker of the Parliament Talat Xhaferi, as well as almost all ministers attended the formal academy at the "Alexander Palace" hotel.

The work responsibilities of the mayors in the municipalities with a majority of Albanians, such as Chair, Kichevo, Saraj, Arachinovo... were in the background, because the main thing was the celebration of the Day of the flag and the independence of Albania. In municipalities with a majority of Albanians, the Albanian flag was flown, but not the state flag, which is contrary to the Law on the Use of Community Flags. The only exception was the ceremonial academy in "Alexander Palace", where the Albanian, state flag, as well as the flags of the USA and the EU were displayed.

The celebration of the national holiday of Albania, Ahmeti, in the company of the first vice-prime minister Artan Grubi, started in Shipkovica where he unveiled the bust of a dead KLA member from that village, Cemil Abdurahmani. The leader of DUI congratulates all Albanians on November 28 with a message that the Albanian flag has never been folded, because it is soaked in blood.

- This flag does not come down and does not bend because it was soaked and raised with the blood of Cemil Abdurrahman - said Ahmeti.

- Hand on heart, I must be open that when I had obstacles, I went to the vice president of DUI Izet Majiti, to Arbr Ademi, to the mayor, in intensive communication with the Minister of Finance Besimi, with Minister Jeton and everyone helped me with this situation that we have now - Zeqiri said. 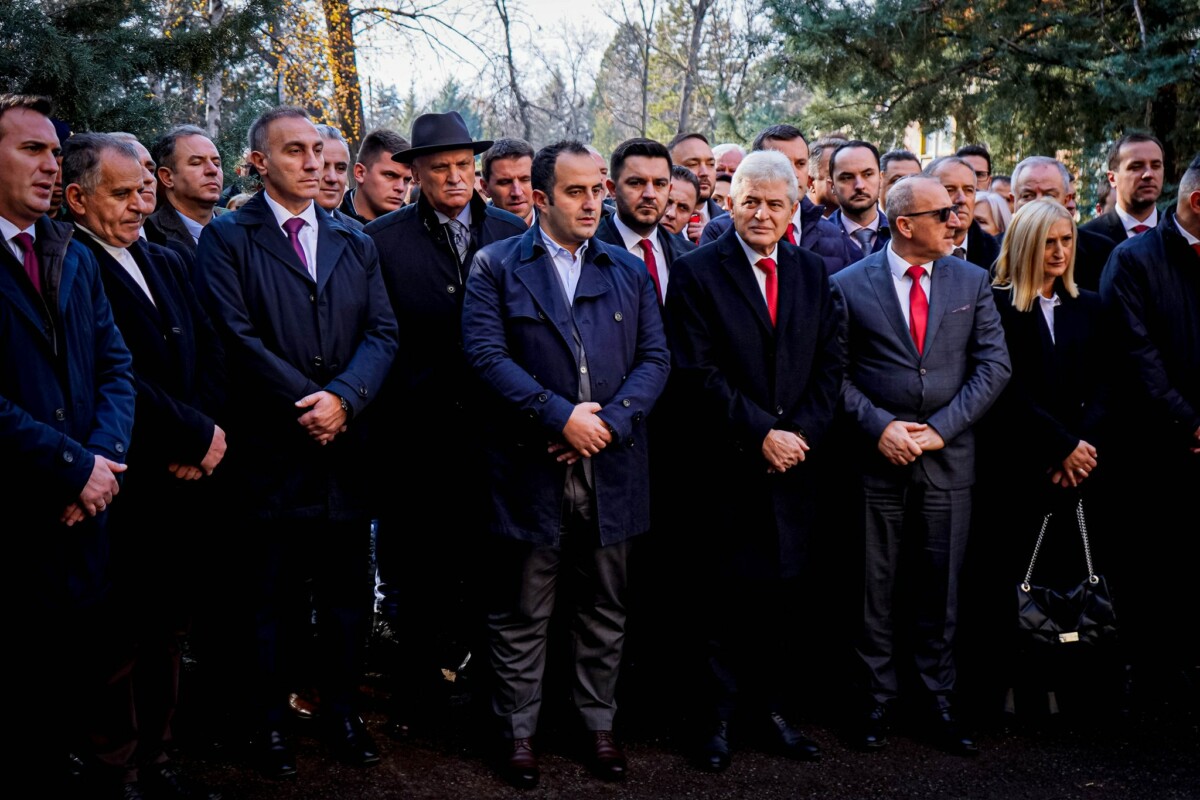 Apart from Ahmeti and Grubi, the beginning of the reconstruction of the mentioned university was also attended by MPs Arbr Ademi and Izet Majiti, then Eyup Rustemi, director of the State Roads PE, Minister of Economy Kreshnik Bekteshi and other officials. It is remarkable that even though it is a project financed by the Government, Prime Minister Dimitar Kovacevski was not present, nor other Macedonian ministers, and none of the speakers spoke in the Macedonian language.

In Ahmeti's congratulation on the day of the flag, the DUI leader quoted Mithad Frasheri as saying that "in slavery our work is war, and in freedom our struggle is work".

Ahmeti said it best describes the nation's journey, its righteous mentality to defend its identity, ancestral lands, dignity and the goal of a bright future for generations.

At the ceremonial academy, only the anthem of Albania was sung, and the President of the Assembly Talat Xhaferi addressed fellow party member Ahmeti with the words commander and president of the Albanians in North Macedonia. Ahmeti said that this day is commemorated for all those who shed blood for the Albanian flag and that Albanians, wherever they are, are celebrating today.

Within the framework of the celebration of "November 28" yesterday, the prime minister of Albania, Edi Rama, said that the Albanians from North Macedonia are better than ever in the achievements of the Albanians from these areas.

- I don't believe that there are many who today have the courage to say that they knew that on the 110th anniversary of the independence of Albania, Albanian will be the official language in Macedonia, there will be the highest participation of Albanians in the government and institutions, and there will even be a president of the Assembly, an Albanian - said Rama.

Brazilian Jiu-Jitsu is a self-defense martial art that is a combination of traditional Japanese Jiu-Jitsu and Judo. It is a fairly new martial art, whose founders Carlos and Helio Gracie created it at the beginning of the 20th century in Brazil. Get the most important news, free on Viber Today is considered one of the most popular martial arts in the world, including …

Conversation with Sofia Stojanovska: It's powerful to be a woman in the world of Brazilian Jiu-Jitsu Read More »

Dichev for "Sloboden Pechat": The names of the cultural clubs are a provocation, and the withdrawal of Ambassador Angelov is unreasonable

The thug from Veles who shot the girl in the stomach committed suicide, he was convicted of killing his own brother

VIDEO: 11 people died in the big Russian attack, the Ukrainians claim to have shot down dozens of Russian missiles

Kovacevski: Constitutional amendments are one of the decisions to full membership in the EU

VIDEO: Punishment is demanded for Novak Djokovic's father, to keep politics out of sports

Kovacki blames the tender for the procurement of food in the Ministry of the Interior, Spasovski says that with the new procurement the police officers will receive cheaper food

The very delivery of Western tanks to Ukraine if we look at it in isolation or in numbers generally means nothing and may even cause a headache for Ukrainian operatives because it will now create a logistical horror for Ukrainians. This is because it will be difficult to synchronize the tanks on the battlefield with the other genders of the ...