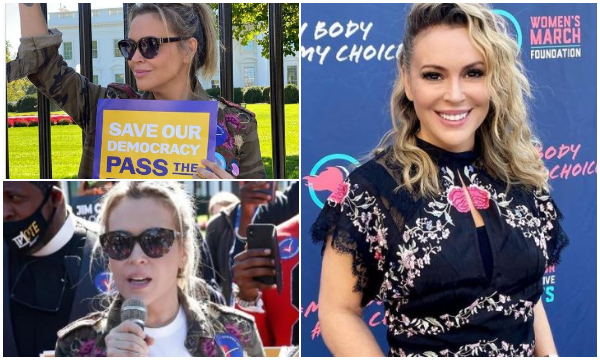 Police in Washington have arrested actress Alisa Milano as she and a group of like-minded people protested in front of the White House, demanding changes to the right to vote.

"I was just arrested while protesting and asking the Biden administration and the Senate to exercise their right to vote. "Stand by me and tell the Senate and the White House out loud that everyone must have those rights, no matter where they live," the actress wrote on her Instagram account.

Police first warned the actress that she and members of the People for the American Way association must leave the area, otherwise they will have to arrest them under a law banning crowds and occupying the street and sidewalks.

NOW: People For Board Member @alyssa_milano explains why she's risking arrest today in the fight for voting rights. The protest is starting how - tune in to help us tell President Biden: no more excuses. #VotingRIghtsNOW! https://t.co/NX8G31ldCN pic.twitter.com/PBOQsZ5iOE

Before the protest, the actress announced that she could be arrested.

"I will risk arrest today because 425 laws were introduced last year that restrict the right to vote," Milan said in a video posted on Twitter. "That is why I will ask our president to do everything in his power to pass the Freedom of Voting Act, the John Lewis Voting Rights Act and the DC Statehood Act."