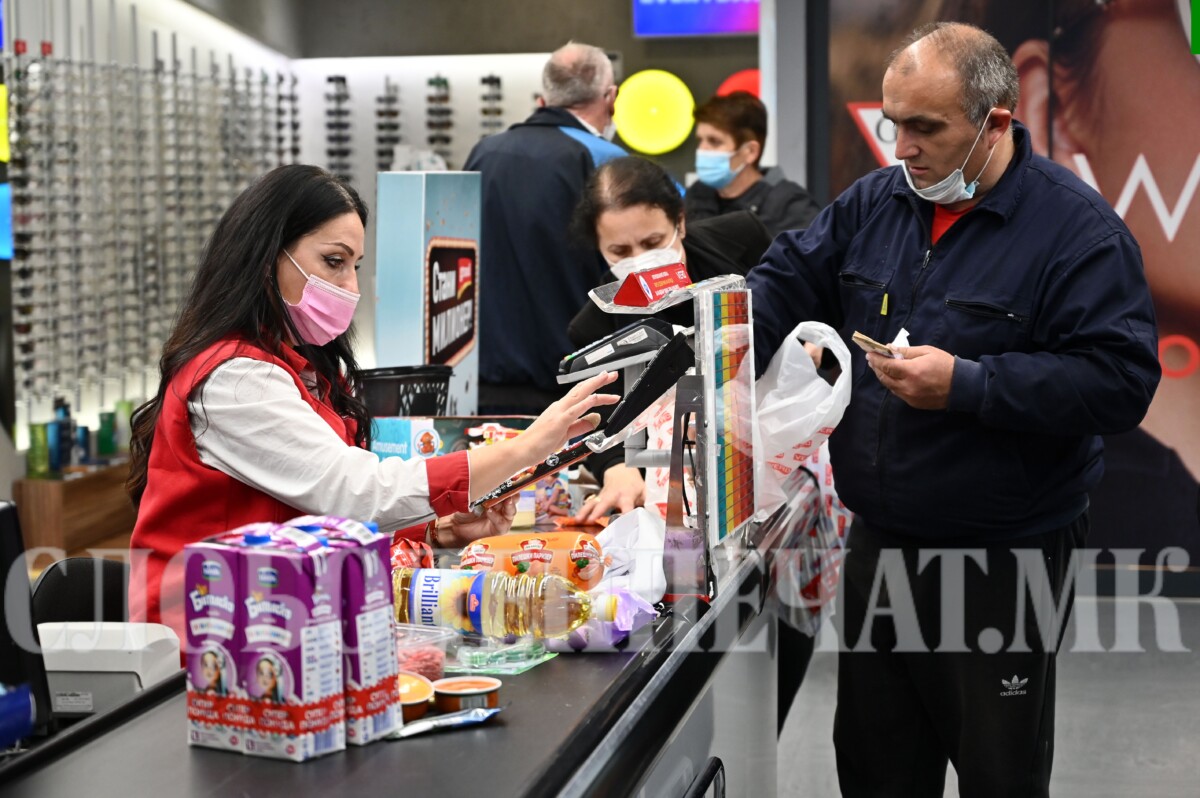 Economists say that prices cannot rise indefinitely because they are limited by the consumption power of the population. Businessmen, on the other hand, say that there is a danger of closing companies

Every day some new price surprise lurks around the stores. The traders say that the latest price increase is for "Rosa" water, which was delivered to them yesterday with a wholesale price of MKD 24 for a half liter package. After a few denars, the prices of yogurts are constantly increasing in the trade. In many stores it can be noticed that instead of writing the price per kilo of cheese, the prices are pasted on the vacuumed pieces for the specified quantity. Salespeople from one store explained to us that when the prices were per kilogram, many customers at the cash register, when they heard how much a piece of cheese costs, did not want to buy it. At the refrigerators where meat is sold, there are clearly far fewer customers than before. Pork ribs are almost 400 denars, beef shoulder is 700 denars.

On the other hand, the "Sloboden Pechat" walk through the stores in Skopje showed that there are large stocks with reduced prices, but mainly on products that are not basic food, although discounts can also be seen on some types of dairy products. Buyers, on the other hand, analyze prices for a long time, especially standing in front of dairy refrigerators. They also complain about smaller and smaller packages.

"Everything is more expensive, everything is reduced. Here, I buy mayonnaise and read that it has 86 grams! The same that used to be 100 grams. In the barrels, the curd can hardly be found through the skins, and I paid 50 denars for half a liter of yogurt in a barrel," says one of our interlocutors.

Both manufacturers and traders say that the price increases are not to make extra profit, but to maintain business, and they mention the price of electricity as the biggest item, for which they warn that the support of the state is necessary.

The easiest solution against inflation is the most expensive

However, economists say that prices cannot rise indefinitely because they are limited by the consumption power of the population. At some point, the products simply won't be able to be bought. But the problem is that a large number of manufacturers and traders will not be able to realistically reduce prices, given the increased input costs.

University professor Zoran Ivanovski explains that the measures taken by the National Bank will give a delayed result, sometime until the end of the year, and will lead to a slight reduction in inflation, while the easiest solution to solving inflation is through intervention from the budget, of course if we were a rich country.

"It is a fact that the National Bank takes the main role in dealing with inflation. It is clear that the ultimate goal is an increase in the price of money and of course a decrease in money in circulation. As a result, a reduction in consumption in the economy can be expected, and thus a slight reduction in prices as a result of inflation being based on factors of supply and not demand. Such interventions have a lower impact and need a period of time to be effective in practice. Thus, with a certain delayed period, the monetary effect can be expected until the end of the year," Ivanovski told "Sloboden Pechat".

He says that similar measures have been taken by the European Central Bank and the American Fed, but that a more serious fight against inflation requires the inclusion of fiscal policy.

"The easiest way to eliminate inflation is to return electricity prices to those before the crisis period. The state can do that if it pays that price difference for all firms. But of course, if there is money for it. Only rich countries can do that," says Ivanovski.

The manufacturers' calculations are not optimistic

Some producers, on the other hand, not only do not announce a reduction in prices, but have already announced an increase if the Government does not provide them with cheaper electricity.

The group of the milling and baking industry in the Chamber of Commerce says that the prices of bread and pastries will increase by at least 10 percent if the state does not intervene with the price of electricity. From there, they complained that not only were their electricity bills huge, but also the price of wheat on the stock market had started to increase.

Milk producers, on the other hand, in addition to the price of electricity, have a big problem with the procurement of raw milk, because farmers demand higher prices every day.

Minister of Economy Kreshnik Bekteshi in a televised interview he said that there are producers and traders who abuse the current situation and make unjustifiably higher prices. At the same time, he stated that there are companies where the output products are much more expensive, although the electricity in their production process participates only with 15 percent.

For some of the economists consulted by the "Free Press", this statement is not correct, because in addition to electricity, the growth of fuel prices, packaging, labor, and our other input elements should also be taken into account.

The businessman and former deputy prime minister Kocho Angjushev in a television interview, he said that "those companies where the share of electricity in the total costs is over 20-30 percent, and which are on the free market, will not be able to sustain the high energy prices."

"If these companies start closing, and they have a large number of employees, those people will have no way to even pay their bills," Angjushev said.

The Government, on the other hand, is making efforts to provide cheaper electricity for the economy than Bulgaria, but since this country is a member of the EU, according to European rules, it cannot sell electricity to us at a lower price than the stock exchange price, but therefore compensation help can be requested from EU.

And the Chamber of Commerce requested urgent measures to mitigate the price shocks in the area of ​​electricity. They demand that the measures be adopted today, at the Economic Council.

"Without state support, the ten largest consumers of electricity, which have 6.000 employees, an income of 1 billion euros, next year, according to these prices, would have to pay half a billion euros, which would damage their competitiveness and hit the the foundations of the Macedonian economy. For other companies on the free market, the Chamber suggests that they receive a certain base price above which the state would cover the costs and thus create the necessary assumptions for some kind of predictability, which is the basis of business" - say the Chamber of Commerce.

From there, they add that during the crisis period, the electricity bills of the companies have increased six times. The Chamber pointed out that the market has recorded the division of companies into smaller entities in order to enter the regulated market, where prices are much lower than stock prices, which can lead to serious consequences for the entire energy system.