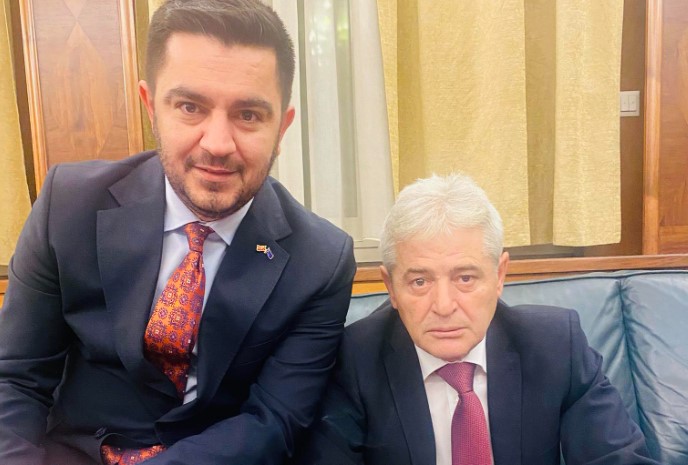 If they know Ahmeti, they should know that he does not succumb to blackmail. Ahmeti will call the "firemen" to a meeting, but it is unclear what they are dissatisfied with when in the past 20 years they have received everything they could from the party and the state - a DUI official told us

The leader of DUI Ali Ahmeti will call the "firemen" to a meeting to calm the discontent of the group, led by Izet Medziti, Musa Xhaferi, Nevzat Beita, Blerim Bexheti и Visar Ganiu in order to overcome misunderstandings in the party, and not on the public stage, high officials from DUI briefed for "Sloboden Pechat".

It is uncertain whether the leader of DUI will succeed in his intention, because Ahmeti does not even think of replacing the first vice prime minister Artan Grubi, nor any other minister from DUI in the Prime Minister's Government Dimitar Kovacevski.

This, according to the "firemen", will mean the opening of an internal party front, which may end in factionalism or the formation of a new party, since the condition is the removal of all ministers from DUI.

"If they know Ahmeti, they should know that the leader does not give in to pressure and blackmail and that he least wants internal party problems to be solved through a letter to the public and through the media, but through a debate within the party. "Ahmeti will call the "firemen" to a meeting, but it is unclear what they are dissatisfied with, when in the past 20 years they got everything they could from the party and the state," says the DUI official.

According to our source, it is expected that the party bodies will soon be re-equipped and the closest party leadership - the vice-presidents - will be elected, which will remove one of the arguments of the "firemen" that three years after the Congress, the party's bodies have not been elected and that on important issues Ahmeti and Grubi decide for the party and the state.

The DUI briefed that the "firemen" blamed everything that could be blamed and that at least they should call for reforms and democratization of the party.

"They are in office or have been in office for several terms. Musa as Vice Prime Minister for the Framework and Minister of Local Affairs and Chief Personnel Officer in DUI, Beita – Member of Parliament, Minister of Local Self-Government and Mayor of Gostivar for two terms, Medjeti, Mayor of Chair for two terms and now Member of Parliament, Bejeti – Minister of Justice and Mayor for two terms of Sarai. It is not true that they were not consulted about appointing directors. On the contrary, relatives and their relatives are directors, ambassadors...", say officials from the party.

They add that the "firemen" do not have the strength to dissolve DUI, that they can form a new party, but they will end up like the parties of Hisni Shaqiri and Gzim Ostreni.

Unofficially, government partners Kovacevski and Ahmeti discussed the split in DUI. Kovacevski was interested in whether the misunderstandings could affect the government cabinet, and he received an assurance from Ahmeti that there would be no changes of ministers from DUI.